You are here: Home / Dog Facts And Fun / Reverse Sneezing in Dogs – What Causes It and What You Can Do About It 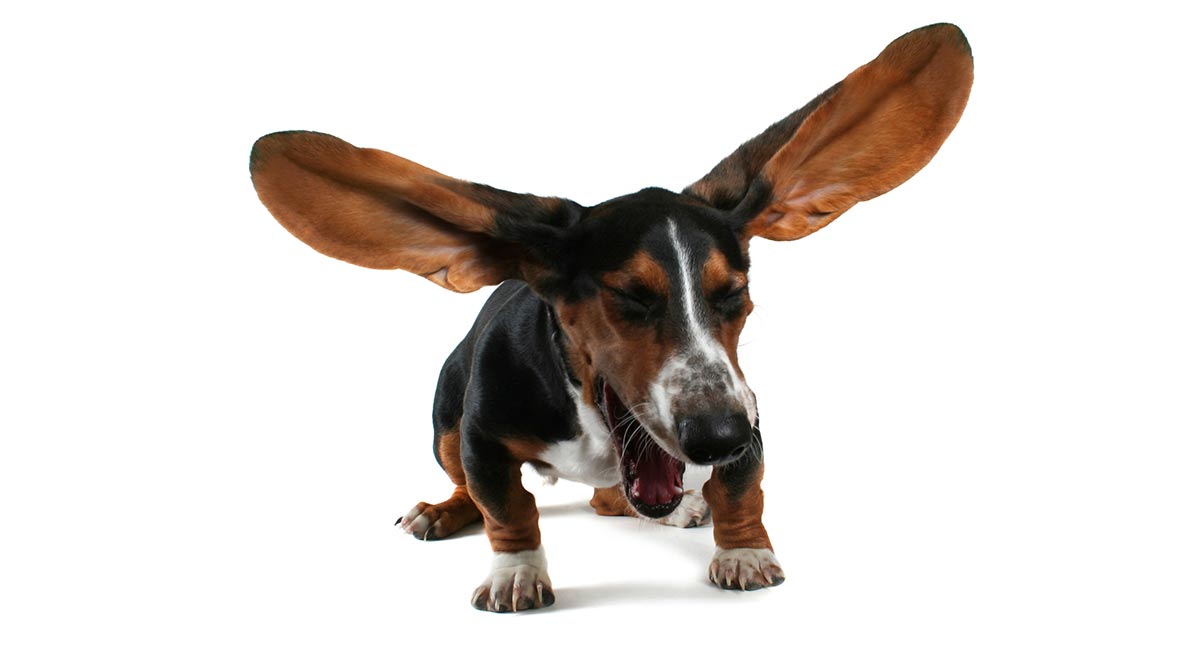 Have you ever wondered what reverse sneezing in dogs is? Is it dangerous? A symptom of some problem? Or something completely normal and benign?

There is a lot of misinformation out there about reverse sneezing.

In fact, my uncle once told me it was an asthma attack, while my father always told me that it was caused by dust getting lodged in a dog’s nose.

I also had a complete stranger tell me it was a sign of a nasal tumor.

So which of these “facts” are true, and which are old wives’ tales?

Read on to figure out exactly what reverse sneezing in dogs is, what causes it, and whether it is actually dangerous.

What is Reverse Sneezing in Dogs?

So what is reverse sneezing in dogs?

Reverse sneezing is often described as abrupt, quick, repeated inhalations through the nose.

This is then followed by snorting sounds and sometimes gagging.

Furthermore, reverse sneezing in dogs is also described as “paroxysmal”.

This means that it is spasm-like and therefore uncontrollable. This is similar to a sneeze or hiccup – it’s a reflex that you can’t really control.

This phenomenon is more common in smaller dogs, possibly because they are closer to the allergen-rich ground and have smaller throats.

Truthfully, as a dog owner, my pooch always kind of freaks me out when he does this. He just suddenly stops and acts like he is having trouble breathing.

But truthfully, it really isn’t cause for concern, though it can be a little scary.

Reverse sneezing is very common in dogs and is caused by a number of things.

Causes of Reverse Sneezing in Dogs

Why to dogs reverse sneeze? 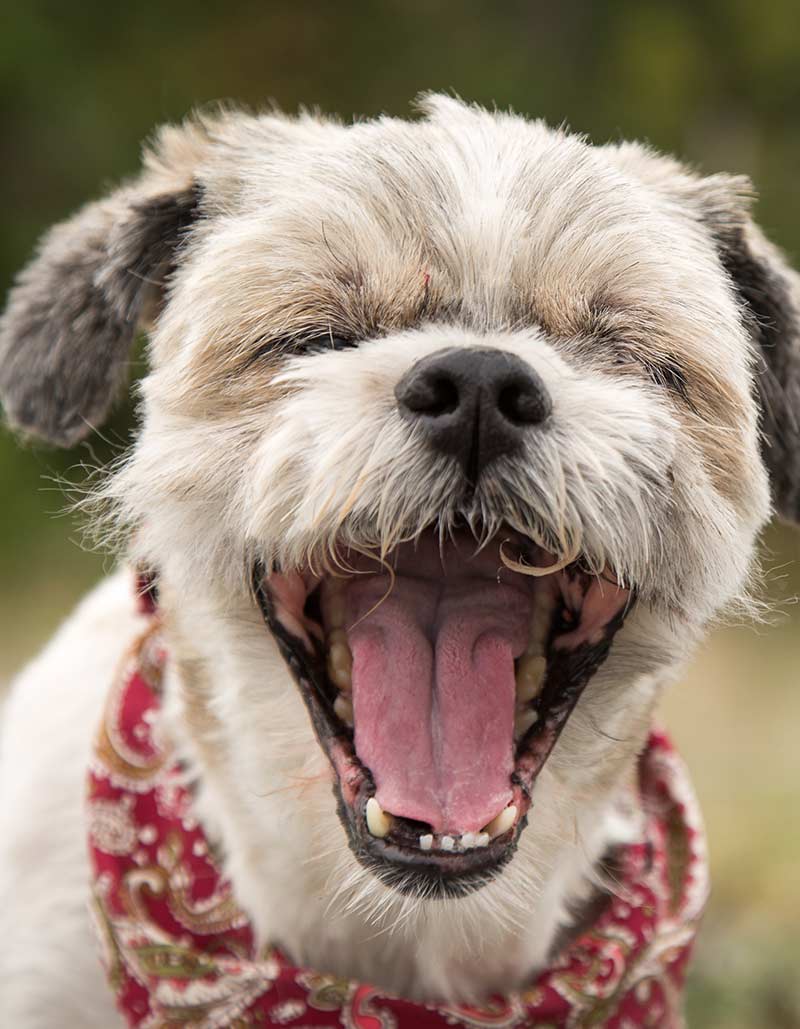 The exact cause of reverse sneezing is unknown.

However, it is thought that reverse sneezing is mostly caused by irritation or inflammation of the nasal cavities.

This can be caused by dust, pollen, and other foreign particles. In this way, reverse sneezing is a lot like regular sneezing.

Still, reverse sneezing is also commonly seen after periods of over excitement.

This might be because excited dogs breathe in faster and harder, which can make it more likely for foreign particles to get lodged in their nose.

On the other hand, it might also be because reverse sneezing takes place more frequently when a pooch gets overheated.

An over excited canine jumping around everywhere is surely going to feel the heat after a minute or two.

The reason for this link of reverse sneezing to heat is unknown.

Tracheal collapse is a condition reverse sneezing commonly gets confused with.

Both conditions can cause the characteristic “honking” sound, and dogs can act very similar during each.

However, reverse sneezing goes away rather quickly – usually within a couple minutes.

If your dog continues consistently having difficulty breathing, it is time to take them to the vet.

Dogs can and do have multiple episodes of reverse sneezing close together. However, normal behavior and breathing with return in between episodes.

During a tracheal collapse, however, such a break does not occur.

It is just a reflex that happens, and the exact cause can differ from time to time. Because of this, there really isn’t much you can do to prevent it from happening.

However, there is a technique you can use to calm your dog once it starts happening.

While this technique isn’t fool-proof and doesn’t always work on every dog, it might be just the ticket for your pup.

When you pooch starts having a reverse sneezing fit, try lightly massaging their throat.

This will stimulate them to swallow, which will (in theory) suppress their sneezes.

Blowing gently on his or her face can also help, as it interrupts the current flow of air and might allow your pooch to catch their breath.

If you dog was overexcited before the reverse sneezing started, it is likely some cool air and calming words would do the trick.

If you believe the reverse sneezing is caused by pollen and allergies, you might want to schedule a visit to your vet.

While most dogs do not require medication, those who have allergies are occasionally prescribed antihistamines if the problem is chronic or severe.

It is always a good idea to speak to your vet if reverse sneezing interferes with your pet’s life.

Is your pooch’s reverse sneezing getting worse?

This can be caused by a number of things. The most common one, perhaps, is the increase of allergens in the air.

If you dogs is experiencing reverse sneezing due to allergies, it only makes sense that this symptom would get worse if the allergens in the air increased.

Your vet might recommend an antihistamine for your pooch if they have particular severe allergies, and you may notice a decrease in reverse sneezing when they take them.

This is probably due both to the overheating factor and the increase of dust in the air.

There really is not much you can do about this problem (we can’t, after all, control the weather). Keeping your dog cool, however, might help minimize the impact.

An over weight dog might also reverse sneeze more often because they overheat faster – if you think your dog might need to shed some pounds, your vet can support you to make the right changes.

Finally, reverse sneezing can also be caused by your dog’s genetics.

One study in Germany found that dogs with severe shortening of the face, like is seen in French Bulldogs and Pugs, experienced more reverse sneezing than other breeds.

This is likely to be partly due to the abnormal formation of their upper respiratory tract, and also because that malformation makes them overheat faster than breeds with longer muzzles.

Whilst reverse sneezing is no more dangerous in these breeds per se, it can be the thin end of the wedge for dogs that go on to develop brachycephalic airway syndrome.

This is just one of the reasons we never recommend buying a puppy with an extremely flattened face.

This can be a particularly annoying problem to have.

It doesn’t really matter where your dog sleeps at this point, since many dog’s snorting can be heard from the other side of the house.

Surely there is something you can do about it… right?

There are a couple things you can try. However, none of these are foolproof.

First, ensure that your dog isn’t simply getting too hot. This is common at night, especially if your pooch sleeps in bed with you or with lots of blankets and fluffy bedding.

Then, make sure to wash your pet’s bedding. If their reverse sneezing is caused by allergies, this might help.

Lastly, if none of these steps work, try moving their sleeping location.

Sometimes a particular plant or piece of furniture can cause the reverse sneezing episodes. Moving them to a different area might solve this issue.

So, now that we know all about reverse sneezing in dogs, what does it look like exactly?

Seeing your dog experience reverse sneezing can be scary, especially the first time.

Owners often question if it really IS reverse sneezing… or if their dog is having random fits of suffocation.

Some vets have even reported owners calling their emergency line in the middle of the night after their pooch has an episode of reverse sneezing!

While it is always a good idea to call your vet about any troublesome question you have, it is equally important to familiarize yourself with what reverse sneezing looks like so that you can recognize it when your canine does it.

For that reason, we recommend watching this video:

It is important to note that reverse sneezing can occur on multiple levels. Just because your dog’s reverse sneezing is more severe than the dog in this video is not usually a cause for concern.

Each dog is different, and therefore each pooch will experience reverse sneezing slightly differently.

As you can see, reverse sneezing in dogs isn’t at all dangerous.

Actually, it is quite normal and will probably happen to every dog at least once.

It is always best to talk to your vet about your canine’s specific situation for a treatment plan if you are worried about the frequency of their reverse sneezing.

Has your pooch ever reverse sneezed?

What was your reaction?

Do you know what triggers their reverse sneezes?