You are here: Home / Breeds / Miniature Dalmatian: Your Guide To A Tiny Spotted Dog 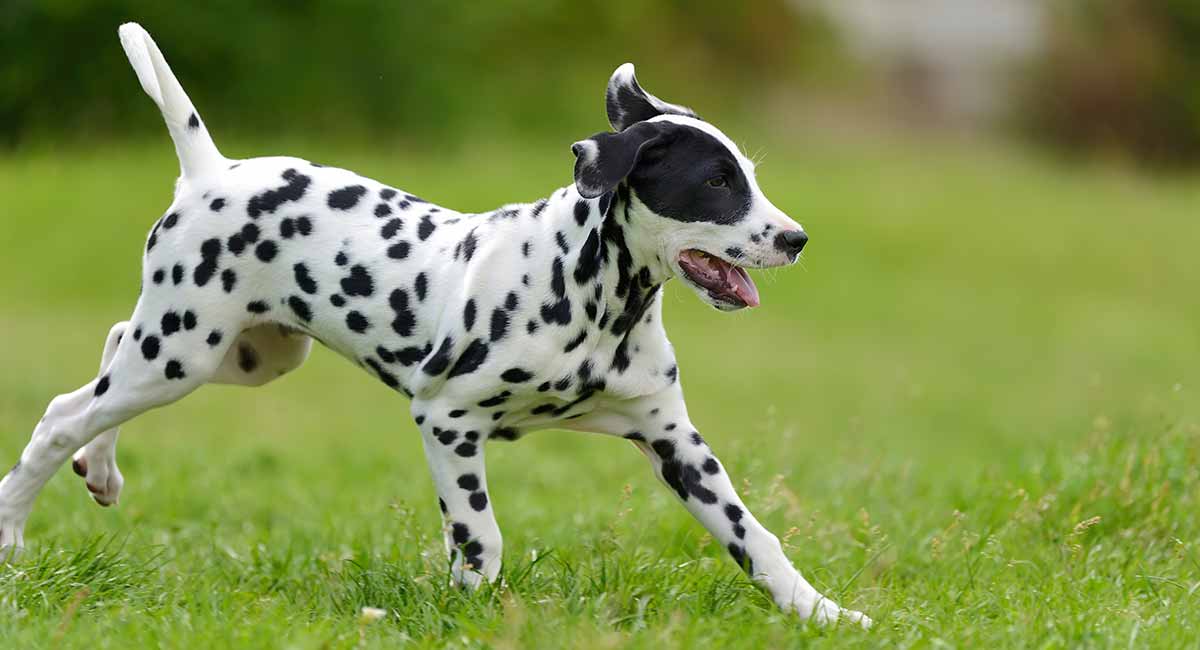 Dalmatians are an iconic breed with a huge appeal, but they are also pretty big. So it’s easy to see why people go searching for a miniature Dalmatian puppy instead. Today we are going to look at whether anyone has truly succeeded in breeding a micro Dalmatian, and share the pros and cons of bringing home tiny versions of large dogs.

The Dalmatian is perhaps one of the most distinctive looking dog breeds around. With its handsome face, athletic build and unique spots, they are hard to forget. So, what could be cuter than a smaller version of such an attractive dog? No doubt this question has led to the creation of the miniature Dalmatian.

Sadly, some miniaturized dog breeds are plagued with health problems. But this is not always the case. So, let’s find out about the miniature Dalmatian.

What are they like? Are they generally healthy and happy? What sort of home is best for them?

The Appeal of the Miniature Dalmatian

As we have mentioned, a lot of the time, people fall for miniature dogs because they are just so cute.
But it is not always about looks.

Some people have limited space, and a smaller dog is much easier to keep. Their beds, toys, and playing area don’t take up too much room.

Additionally, big dogs have big appetites. A dog that does not make a big dent in the weekly grocery bill seems like a good idea to many.

Where do Miniature Dalmatians Come From?

So how do breeders create dogs that are smaller than usual? There are three ways this is done.

Unfortunately, not all these methods are in the best interests of the dog. It’s important to understand enough about these methods to make a responsible choice when deciding whether to bring a miniaturized dog home.

Mix with a smaller breed

A common way to make a ‘miniature’ version of a dog is to mix with a similar yet smaller breed.

Clearly, the resulting dogs are not purebreds, although some crosses will look very much like the original breed.

While this will not bother many people, some will be concerned that the resulting ‘designer dog’ may not be predictable in appearance or temperament, as purebreds tend to be.

It’s true that as a mixed breed, it will inherit some characteristics from the ‘other’ parent.

However, the flip side is that introducing some outside genes may also reduce the risk of certain inherited illnesses that can run in certain breeds of dogs.

To make a smaller Dalmatian, a couple of popular mixes are:

Due to the massive size difference between these two breeds, there is variation in the expected adult size of a Chimation – but they can be as small as 6 pounds when fully grown.

If you would like to read about this cross or other popular Dalmatian crosses, you can find more information here.

They will have a smooth coat and there is a good chance they will inherit the spottiness from their Dalmatian parent.

There is a risk they could inherit some of the problems associated with the tiny skull of the Chihuahua which can affect balance, strength, sensation and breathing.

There is also the chance some problems common to the Dalmatian could crop up, most notably, deafness.

Additionally, much care is needed when breeding two dogs of such different size.

The Dalmatian and the Greyhound mix produces a sleek, athletic dog. However crossing with an Italian Greyhound, the smallest of the Greyhound crew makes for a similar dog only much smaller.

The Italian Greyhound, or Iggy, stands at around 13 to 15 inches and weighs a very slight 7-14 pounds. You can read more about the breed here.

Of course, seeing the Dalmatian is bigger, you should expect that a cross between the two will likely be a little larger than this.

The Iggy is susceptible to a number of health concerns, such as epilepsy, dental problems and sight issues.

As always, meeting the parents of your pup and getting a good medical history is one way to check your puppy is not likely to inherit such problems.

There are different types of dwarfism dogs can inherit. Both result in a smaller dog but the reasons behind their diminutive growth and associated side effects will differ.

Some breeders miniaturize dogs is by deliberately breeding them to have some type of dwarfism.

While it doesn’t seem to be common for Dalmatians, there are reports of litters with osteochondrodysplasia, which results in disproportionally short and bent limbs.

To create this kind of dwarfism, dogs carrying the gene must mate. The resulting offspring will have a 50% chance of inheriting the trait.

It can be difficult to know if a dog has the gene. This is because a dog with the gene, but does not have the disorder may not be smaller than usual itself. To find out for sure you will need to take a DNA test.

Introducing the dwarfism gene will create a small dog which can be vulnerable to health disorders such as osteochondrodysplasia, symptoms will differ according to the severity of the disorder.

Some dogs will have a smaller stature without too many other concerns, others will suffer mobility issues, joint pain, lameness and therefore an inability to exercise.

However, there’s no way to predict how a dog will be affected so deliberately breeding this gene in is akin to gambling with a dog’s welfare.

Runts are smaller than its brothers and sisters and often is prone to illnesses compared to the rest of the litter.
Some breeders deliberately breed from runts to keep the resulting puppies small.

Breeding from runts will create puppies that are sick and could suffer from an undiagnosed health condition that makes them small.

It’s equally disturbing to learn that sometimes breeders will deny puppies proper nutrition to ensure they do not grow to their full size.

Is a Miniature Dalmatian Right for Me?

You may have concluded that whether or not a miniature dog is going to be happy and healthy depends on how the breeder made the dog smaller.

In the case of the Dalmatian, as is the case with most ‘miniature’ breeds, it is best to choose a dog that is not actually a ‘pure’ miniature, but rather a dog that has been crossed with a similar, smaller breed.

This will still require you do some homework – become familiar with the characteristics of both the Dalmatian and the breed it is being crossed with.

Cross-breeds can inherit characteristics from either parent, so it is important to be prepared for a pooch that could swing either way.

Take into consideration not only the energy levels of a Dalmatian but also the breed they are crossed with.

Remember that a Dalmatian cross is likely to be an intelligent, sensitive dog. They will not do well if left to their own devices or treated without gentleness and patience.

So, while a miniature Dalmatian may be smaller in size, they will need an experienced owner who can provide them with training, play and exercise to keep them both physically and emotionally happy.

There are some breeders who claim that miniature Dalmatians exist, and they have them.

However, those same breeders are also very vague and unforthcoming about how they produced such small dogs.

Before paying lots of money for any pup, it is important to visit the breeder personally. Meet the parents, see evidence of health screening, observe how and where the pups are raised and ask lots of questions about the breeding practices.

Is it a clean, dry, healthy environment with plenty of space and room for play? Is the mother dog relaxed, happy and pleased to meet you? How many pups are bred each year? If the dog is miniaturized, how was this done?

Most clubs and welfare organizations recommend a mother dog should not breed more than 4 to 6 times in her life.

She should not breed more than once a year.

Alternatively, you can check out your local shelter or even contact Dalmatian clubs or rescue organizations to see if there are any Dalmatian mixes up for adoption.

Giving a dog a second chance is not only a lifeline for the pooch but a highly rewarding experience for you!

Make sure you also take a look at our guide to the miniature Husky!

World Association of Dalmations, “Report from the Health and Breeding Commission”, Accessed online 12/6/2019