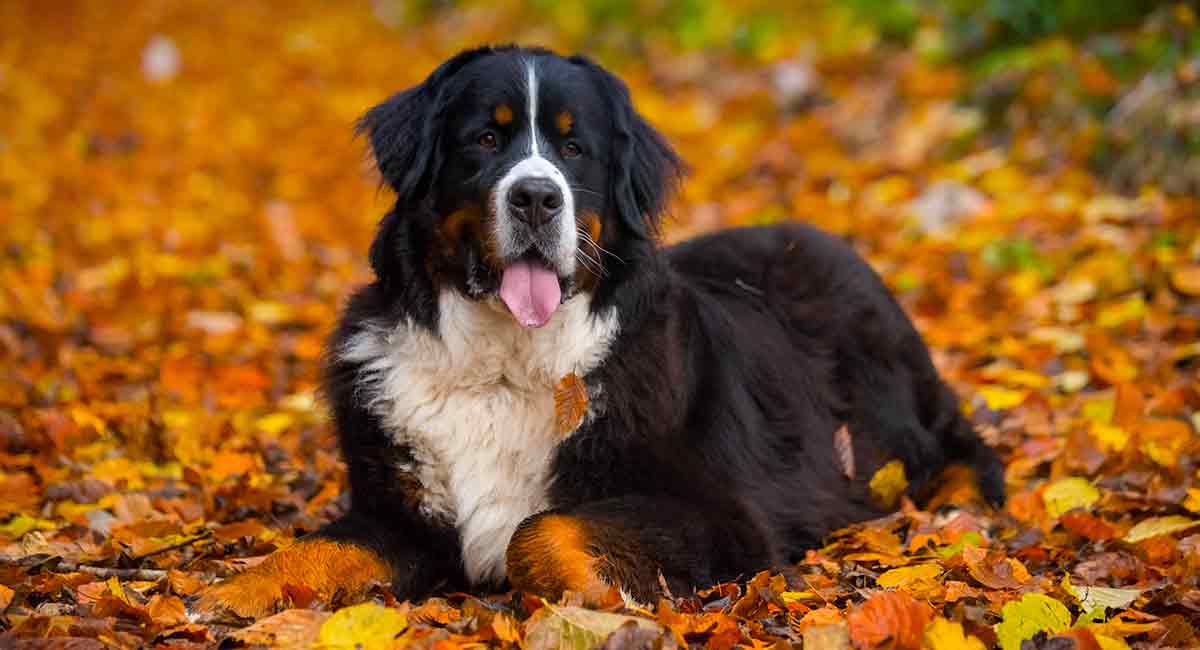 The average Bernese Mountain Dog lifespan is a mere 8 years.

This is low, when compared to the average dog’s lifespan of 11 to 12 years.

This giant breed is more prone to cancer than any other breed.

This said, large or giant breeds do have a shorter average lifespan (around eight to 12 years) than smaller breeds (10 to 15 years).

So although the Bernese Mountain Dog falls at the bottom of the former range, not making double figures is not a total surprise.

Read on to find out how to maxmise the Bernese Mountain Dog lifespan.

How Long Do Bernese Mountain Dogs Live, And Why Not Longer?

The Bernese Mountain Dog, arguably more than any other breed, is prone to cancer.

This is because there is a strong link between the breed and numerous types of cancers that shorten life expectancy.

As one Swiss study put it, “Neoplasia is an important factor for the low life expectancy in BMDs.”

The statistics are eye-opening.

Across the general dog population, the death rate from cancer is around 15 percent.

But in Bernese Mountain Dogs, this runs at a staggering 28-55 percent.

Why is the Risk So High?

This high risk of cancer most likely came about through inter-breeding from a limited gene pool.

This means a low number of parent dogs formed the foundation breeding stock.

Unfortunately, these dogs carried a genetic predisposition to cancer, which has been passed down through the generations.

What are these cancers, and what other health problems are Bernese Mountain Dogs prone to?

One day let’s hope this list will be shorter, as efforts bear fruit to extend Bernese Mountain Dog lifespan.

However, at the present time the list makes somber reading.

Here are common cancers that affect the life of the Bernese Mountain Dog.

This cancer affects the blood vessels, causing blood filled tumors, typically in the spleen or affecting the base of the heart.

When detected in time, splenic tumors can be surgically removed.

However, 50 percent are malignant, meaning the cancer may have spread by the time it is found.

This is something of a Bernese Mountain Dog specialty.

It causes a type of immune system cell called a histiocyte—flooding the liver, lungs, lymph nodes, spleen, and central nervous system—and can lead to uncontrollable bleeding.

This is another potentially serious cancer that has many disguises.

The most common presentation is as an itchy skin lump, with the potential to spread throughout the body.

These darkly pigmented tumors may be more familiar to you as one of the most serious skin cancers caused by sun damage in people.

Unfortunately, melanomas can arise spontaneously in the Bernese Mountain Dogs and are just as deadly.

This cancer affects the body’s white cells, causing massive lymph node enlargement or infiltration of the organs with white cells.

Also known as bone cancer, this is a painful condition.

Research is ongoing as to whether early neutering may contribute to giant breeds of dogs being at increased risk of osteosarcoma.

But more work needs to be done to be certain.

Hip and Elbow Dysplasia: Dysplasia refers to a bone growing poorly and the joints being in bad shape. This leads to joint pain and inflammation, which can be disabling.

Degenerative Myelopathy: This condition causes degeneration of the nerves to the muscles, leading to weakness and collapse.

Porto-Systemic Shunt: This condition occurs when a blood vessel that is useful in the embryo fails to shut down once the puppy is born.

This causes blood to bypass the liver, which results in naturally occurring toxins building up in the bloodstream.

The symptoms include excessive drooling, disorientation and seizures, and are often worse after eating.

Nothing in life comes with a guarantee.

But to give a Bernese Mountain Dog the best chance of a long and healthy life, there are actions you can take to help.

#1: Look at the Longevity of the Parents

When purchasing a pup, do some research into their family tree.

Track down litters from lines where the ancestors survived longer than the average Bernese Mountain Dog lifespan of eight years.

By doing that, there’s a better chance that those pups will also have a longer life expectancy.

#2: Look After the Berner’s Waistline

From Great Danes to Chihuahuas, if a dog is overweight, we know this shortens their life expectancy.

We know this because researchers followed two cohorts of matched litter mates throughout their life.

The only difference between the two groups was their weight. And guess what?

The result was that the lean group lived an average of two years longer than their more chubby fellows.

So whilst staying slim isn’t a cure for cancer, it helps avoid unnecessary early complications from diabetes or heart disease.

These prevent avoidable early death from conditions such as parvovirus, heartworm or the disabling effects of tick-borne diseases.

#4: Get the Girls Neutered

Statistically, the dogs that live the longest are neutered females.

For the best chance of a long Bernese Mountain Dog life expectancy, choose a female pup and get her de-sexed between her first and second season.

This timing dramatically reduces the risk of mammary cancer.

As for male Bernese Mountain Dogs, the benefits aren’t as convincing so de-sexing becomes a matter of moral and personal choice.

From degenerative myelopathy to renal dysplasia, the list of health problems Bernese Mountain Dogs are prone to is all too long.

Sadly, there are too few compulsory screening programs in place.

But where possible, investigate breeders that take responsibility for improving breed health.

These breeders screen the parent dogs ahead of breeding.

Whilst this does not guarantee a problem-free pup, it at least gets the odds going in your favor.

It would be great if there were more schemes in place to promote healthy pups. It might even increase the short Bernese Mountain Dog lifespan.

Currently, Bernese Mountain Dog breeders are only encouraged to screen their breeding stock for hip and elbow dysplasia.

They do this before using them for breeding. As things stand, different countries take different approaches.

These health issues primarily cause pain or suffering.

This has prompted the Swiss Bernese Mountain Dog Club to start assembling data about breed health in order to better understand causes of death.

Approaching this problem from the other direction means developing genetic tests.

These tests predict which dogs are most at risk of developing health problems.

With this aim, there are numerous ongoing research programs studying the range of conditions that shorten Bernese Mountain Dog life expectancy.

An ideal world would see a combination of breeder vigilance and screening tests promoting a longer Bernese Mountain Dog lifespan.

The Bernese Mountain Dog lifespan is not all bad news though.

A German woman named Verena Wulf said during a radio interview that her Bernese Mountain Dog was 25 years old.

The dog, Penny, even reportedly has a tattoo in her ear with her date of birth (1986).

While she was hard of hearing and her vision wasn’t the best, she still could take walks and hang out with the family cat.

Now are the odds slim for you to acquire a Penny? Yes. But as with any dog owner who has a doube-digit large breed dog, it’s not impossible.

Research programs studying their lifespan is the best way to protect future generations of these gorgeous dogs from dying tragically young.

Through better knowledge and taking responsibility, we can invest in future generations of Bernese Mountain Dogs to stretch out their lifespan.