Can dogs eat corn, or is it best not to share despite those puppy-dog eyes staring at your plate? Dogs like corn, and it’s safe for them in moderation in some forms. Corn on the cob is dangerous, but they can eat corn kernels fresh, or from a can if it doesn’t contain other ingredients. Popcorn is safe if plain and in tiny amounts, but in general it’s best avoided. In Can Dogs Eat Corn we’ll be looking at the role of corn as part of a nutritious and well-balanced diet for dogs. We’ll talk about types of corn you can feed safely, quantities, allergies and how corn features as filler in commercial dog food.

Corn is a staple crop worldwide and an important source of nutrients, protein, antioxidants and carbohydrates for humans. Often thought of as a vegetable, corn is actually an inexpensive cereal or grain. It’s versatile too, we enjoy it as flakes in our breakfast bowls and serve corn on the cob grilled with butter straight from the summer barbecue.

Corn does have some nutritional value in the form of vitamins, minerals, and even some protein. It’s also a major ingredient in some commercial dog foods. However, it can be very dangerous in its original state.

When Is Corn Bad For Dogs – The Dangers Of Corn Cobs

When corn is harvested, the corn kernels are contained on the cob, or stem, that they have been grown on. Can dogs eat corn cobs? The short answer is no, corn on the cob is dangerous for dogs.

The cob of the corn is never safe for dogs to consume or even chew on. It is an inedible part of the plant and even a small piece can cause an obstruction in a dog’s digestive tract.

Dogs should not be permitted to eat corn off of the cob or to chew on the cob. Many owners believe that the cob is too tough for their dog to gnaw through. Unfortunately, it is not. Dogs have been known to swallow a portion of or even the entire cob.

Any ingestion of the cob is considered a medical emergency. It can result in choking or an intestinal blockage. It can even cut up your dog’s digestive tract. If you think your dog may have ingested a part of the cob, contact your veterinarian right away.

Okay, that’s the scary part out of the way. Most dogs eat some corn, as part of their diet, most days. Let’s find out if its good for them or bad for them!

Some Fun Facts About Corn

Can Dogs Eat Corn Regularly? Are There Benefits?

Corn is considered a fruit, a vegetable, and a grain—all in one. The corn kernel is the edible portion of the plant. It contains a number of essential vitamins and minerals. Some of these include vitamins B, C, E, and K, folic acid, and selenium. Corn is also an excellent source of both potassium and fiber.

It is a high-carbohydrate food, but it does contain some protein and a small amount of fat. The phytochemicals, like carotenoids, found in corn are also considered to have many health benefits that can help lower the risk of chronic illness. Now that we know a little bit more about the contents of corn, is corn safe for dogs?

Corn products are often used in dog foods for a number of reasons. One reason is because of how inexpensive it is. It’s also easy to store and process. People often think of corn in dog food as just a filler, but it does have nutritional value and isn’t just empty calories. Another concern is that corn and other cereals may trigger allergies in dogs.

Can Dogs Eat Corn If They Have Allergies?

Allergies in dogs are not uncommon, but it’s worth bearing in mind that most dogs never develop allergies while being fed on commercial products or products containing corn. In fact dogs are more likely to become allergic to the proteins found in beef or chicken. Although corn is not a common allergy in canines, some dogs may be allergic. So its always a good idea to introduce new foods gradually.

Take note that dogs can also develop allergies later on in life. So even if your dog has been fine with corn, that may not always be the case. Symptoms of allergies in dogs can include recurring skin problems or stomach problems resulting in diarrhea or loose stools.

For the most part, a little bit of corn is fine to include in your dog’s diet. However, you should feed corn in moderation and not allow such a treat to exceed 10% of your dog’s diet, as with all human foods added to a dog’s diet.

Too much human food may make your dog’s diet inadequate to their nutritional needs and can contribute to unhealthy extra weight gain. Make sure the corn isn’t covered with butter, salt, or other fatty flavor enhancers. A little fat is good, but too much fat and salt is bad for dogs and can lead to obesity or stomach issues, as with humans.

Is Corn Good For Dogs?

Studies show that corn is easily digestible and provides above-average nutrient levels for canine diets when processed for dog food. This research says that corn is a good second choice behind rice for the primary cereal grain in foods designed for dogs.

Corn’s main limitation as a source of nutrition is the limited amounts of vital animal acids that it contains. Lysine and tryptophan are among the amino acids that corn lacks in abundance.

So yes, corn does have some nutritional value. And corn for dogs can provide some protein and certain vitamins and minerals. But this is not a natural food for dogs. They won’t get as much out of it as the foods they are evolved to easily ingest

Yes, kernels are one type of corn that dogs can eat. They are small, and there is no choking hazard. Salt, butter, mayonnaise, and other common toppings offer nothing good for your dog. Make sure the corn kernels are plain and feed only in moderation if you decide to feed your dog corn kernels.

Canned corn mostly consists of kernels of corn taken off the cob. Thus, it’s safe for dogs to eat. Just remember not to give them too much.

Can Dogs Eat Corn As Popcorn?

Unseasoned, air-popped popcorn is a perfectly acceptable little treat. It contains riboflavin, thiamine, and small amounts of protein and iron. A few plain pieces of popcorn every now and then are fine as long as your dog doesn’t get any of the un-popped kernels. The unpopped kernels can be a choking or dental hazard.

Sweetcorn is a variety of corn that has high sugar content. It’s picked at a more immature stage than regular corn. It’s the type we eat fresh, canned, or frozen.

Dogs can eat sweet corn as long as they eat the corn without the cob. But this corn is starchy and hard to digest. If you’ve ever eaten corn and had it come out the other side completely intact, you know what we mean. However, it’s not dangerous at all to dogs.

Sweet corn as a sometimes-snack is fine as long as your dog isn’t showing allergy symptoms.

My Dog Ate Corn On The Cob: What Should I Do?

So can dogs eat corn on the cob? No, you should treat this situation as an emergency. Eating corn on the cob can be a life-threatening medical issue. Dogs cannot eat the cob portion of the plant as it can cause serious problems in their digestive tract.

Signs of intestinal distress can include lethargy, lack of appetite, pain, and lack of a bowel movement. You need to seek help immediately If you see vomiting, lethargy, or loss of appetite. Call your vet or an after-hours vet facility immediately.

Your dog may not seem to have an initial problem, but the sooner you get advice from a medical professional, the better. Be ready to take your dog in as soon as you can. Basically, this situation is treated as one in which a foreign object has been ingested. Your vet may want to induce vomiting. If it’s more serious, and the cob remains in the stomach, endoscopic surgery may be indicated.

Can Corn Treat Any Problems In Dogs?

Corn is not known to treat any canine conditions although there is some nutritional value to corn. It can be found in some dog food brands as a source of cheap and filling nutrition. But it is not a remedy of any kind.

How to Give a Dog Corn

Cooked corn kernels that have been removed from the cob and are free from additives, like salt or butter, are the safest and best form of corn to give your dog. Use these little golden morsels as occasional treats and not as the main component of their diet.

The infrequent bite of plain, air-popped popcorn is also an acceptable treat. Just be careful your dog doesn’t end up with any of the un-popped kernels from the bottom of the bowl. 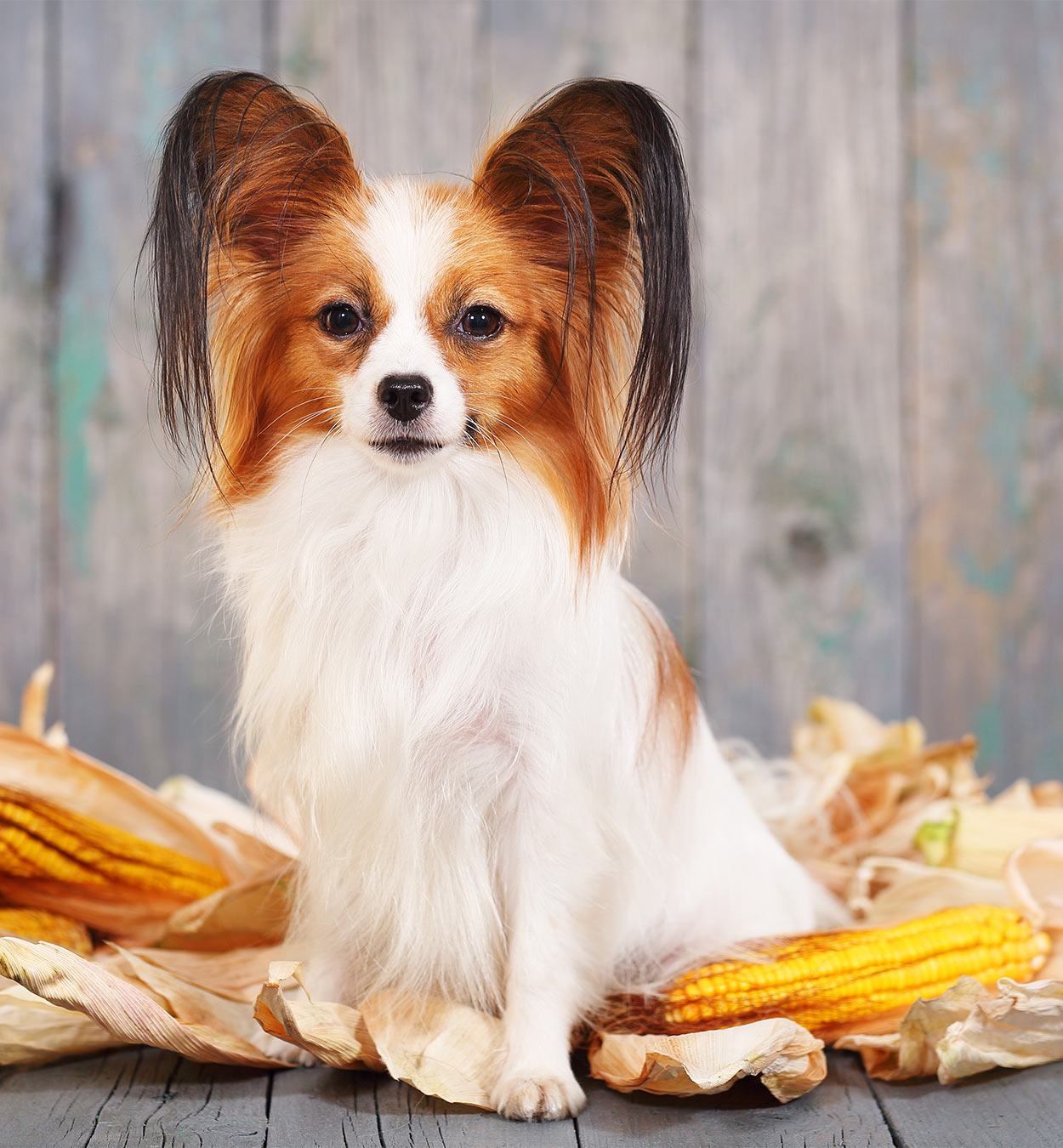 Alternatives to Corn for Dogs

Yes, it’s okay for dogs to indulge in corn once in a while if your four-legged friend has a panache for it. Corn does have some nutrients that are beneficial to dogs. However, there are certain conditions when giving corn to your dog:

Ultimately, it’s important to make sure your dog has all the nutrition they need. And corn can fill them up so that they don’t actually eat the foods that they really need. Use corn as an occasional treat and just ensure your dog doesn’t eat too much. In conclusion, corn kernels in moderation are safe snacks for dogs.

Make sure you take a look at this article to find out what to do if your dog eats plastic.