You are here: Home / Breeds / Mix / Shih Tzu Bulldog Mix – How Well Do You Know This Mix? 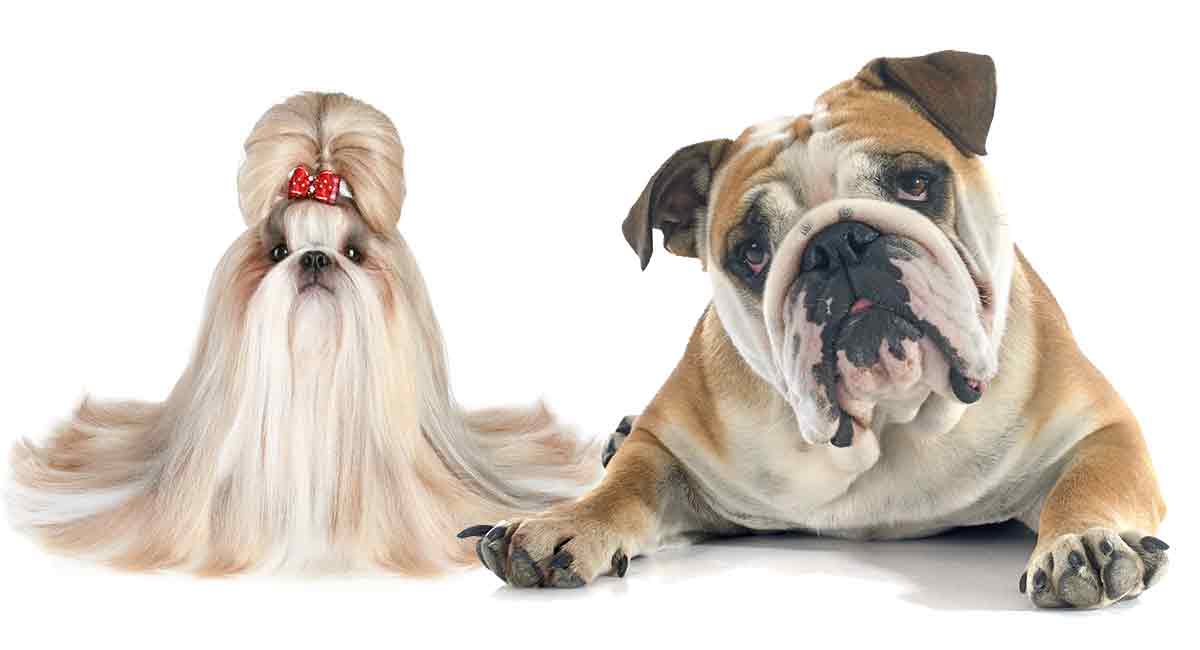 Welcome to the Complete Guide to the Shih Tzu Bulldog mix.

This term refers to their flat faces and short muzzles, which give them a baby-like aspect that is currently very popular.

Despite the cuteness, this conformation causes some serious health problems, which we’ll look into shortly.

But first, let’s look at the origins of this mixed breed and the phenomenon known as designer dogs.

Where does the Shih Tzu Bulldog Mix come from?

This practice is not without controversy.

If you are interested you can find both sides of the story here: purebred vs mixed breed debate.

The Shih Tzu can lay claim to a regal pedigree.

Centuries ago the imperial breeders of the Chinese emperor developed this toy dog from Tibetan breeding stock.

The name translates to “lion dog,” and they’re believed to have been the result of crossing the Lhaso Apso and the Pekingese.

The Bulldog’s origins date back to 13th century England.

They were created to participate in the atrocious sport of bullbaiting, in which a staked bull fought a pack of dogs while fans bet on the outcome.

These ferocious dogs with huge jaws were the ancestors of today’s Bulldog.

When blood sports with animals were finally banned in 1835, the Bulldog faced extinction.

Fans of the breed refined their structure and toned down their temperament to transform this fighter into a courageous, yet calm companion.

Shih Tzu are often referred to as “chrysanthemum-faced dogs” because the hair on their faces grows in every direction.

Bulldogs are one of the most popular mascots for sports teams. Handsome Dan was the first mascot for a U.S. University.

When you combine the sweet face and elegant carriage of the Shih Tzu with the sourpuss expression and thick-set, well-muscled body of the Bulldog, you could be in for a surprise.

Like any mixed breed, the appearance of the puppies is unpredictable.

The Bulldog comes in red, white, fawn, or fallow, in any combination, and a number of markings, including piebald and brindle.

The Shih Tzu comes in a wide variety of colors and markings.

The Shih Tzu stands between 9 and 10.5 inches and the Bulldog between 14 and 15 inches.

Weight is where you see a real difference in the breeds.

The Shih Tzu tips the scales at 9 to 16 pounds, a huge variance from the Bulldog’s substantial 40 to 50 pounds.

Needless to say, as with appearance, temperament could favor one parent over the other or be split down the middle.

Affectionate, loyal, and playful, the Shih Tzu was bred as a lapdog. 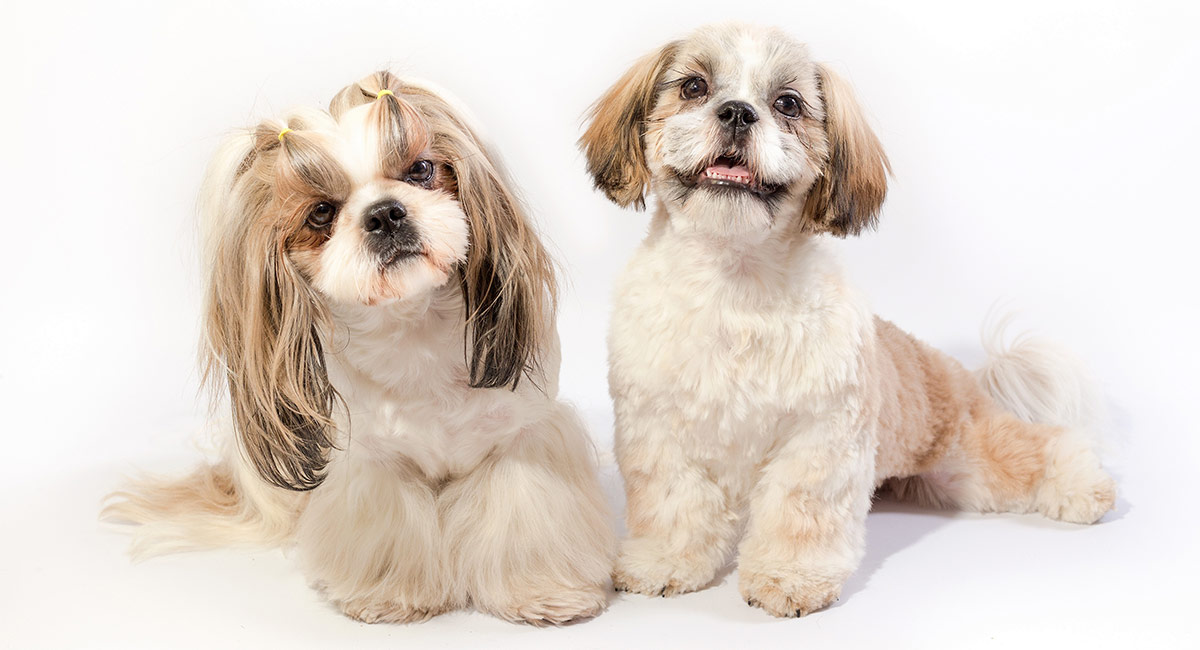 He expects a certain amount of attention, cuddling, and all-round fuss.

Although most Shih Tzus are friendly with people and other pets, without proper socialization they’ve been known to growl or nip when overly handled.

Despite their violent origins, the Bulldog is not found to be aggressive.

Calm, courageous, friendly, and affectionate to their families, the Bulldog generally makes an excellent companion.

As with all dogs, early socialization and positive training methods based on praise and rewards work best.

Helping to ensure your Shih Tzu Bulldog mix puppy grows up to be a well-mannered dog.

Shih Tzus have a reputation for being a handful to potty train.

Crate training can help, not only with housebreaking, but by protecting him from unwanted groping and prodding.

Be patient and introduce new behaviors slowly when training.

Severe corrections will get you nowhere.

The Shih Tzu’s stubbornness is usually alleviated if they know treats are involved.

Strong-willed, the Bulldog is also sensitive and responds well to positive words and treats.

Bulldogs love chewing things, so make sure they always have chew toys to avoid having your belongings gnawed beyond recognition.

A small dog bred to be a house companion, the Shih Tzu doesn’t require a lot of exercise other than short daily walks and some playtime.

In fact, many Bulldogs are physically unable to do much more than a very low level of exercise due to respiratory problems associated with being brachycephalic.

On hot, humid days, a Shih Tzu Bulldog mix should be kept cool indoors as this exacerbates breathing issues.

Stairs also provide problems for the breed, and they should never be in anything other than very shallow water as they cannot swim at all.

The popularity of dogs with short muzzles, like the Shih Tzu Bulldog mix, has made Brachycephalic Obstructive Airway Syndrome a growing problem. 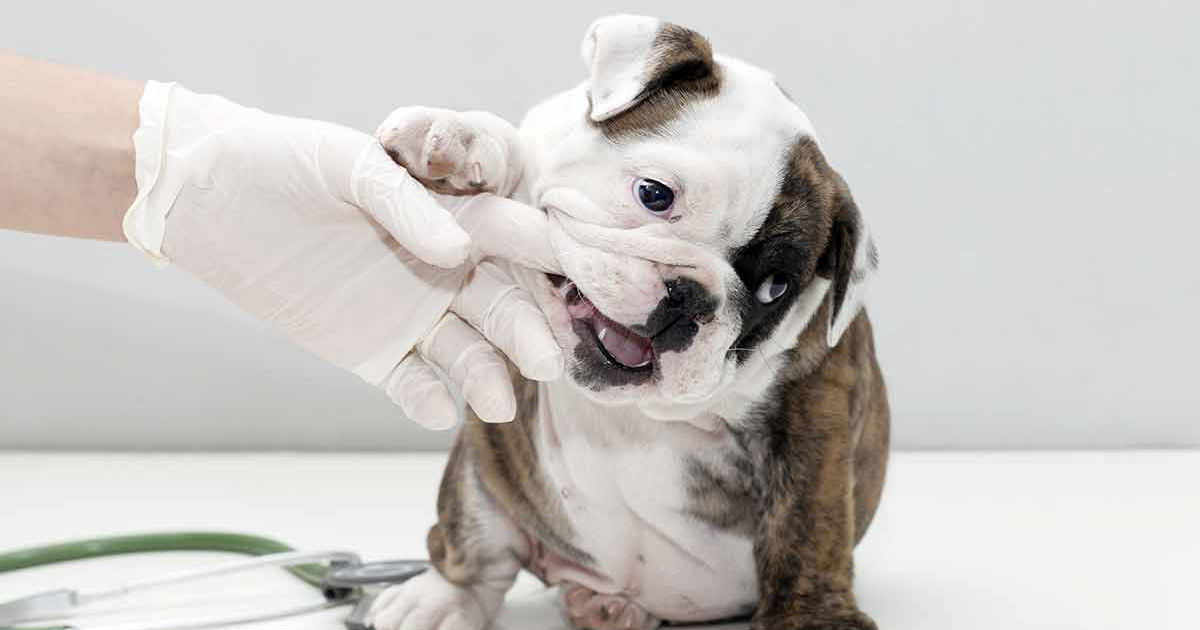 Brachycephalic dog breeds come with a built-in host of genetic problems that causes a lot of health issues that can be challenging to care for.

Because their elongated soft palate covers more of the throat than is normal, Bulldogs snore and snort.

Eyes which protrude slightly make them vulnerable to eye diseases.

The Shih Tzu can have other conformational issues hidden beneath their long silky coats.

Disproportion in their short legs and long backs leads to an increased risk for intervertebral disc disease.

Bulldogs fare even worse when it comes to conformational health concerns.

They’re also prone to serious and painful back problems caused by deformities in their vertebrae caused by screw tail.

You will need to carefully clean the area around the tail daily to keep it clean and dry, as dogs with screw tail are prone to nasty skin infections.

Again, when it comes to the coat of the Shih Tzu Bulldog mix, it could resemble either parent, so we’ll take a look at the grooming requirements of each breed separately.

The hair on the top of the head should be trimmed short or tied up to avoid eye irritation.

Gently cleaning the corner of the eyes with a damp cloth will help reduce eye issues.

The Bulldog’s coat is much easier to manage. Use a soft brush once or twice a week to remove loose hairs.

The wrinkles on the Bulldog’s face need to be regularly checked to ensure the skin is clean and dry to reduce the chance of irritation or infection.

The Bulldog is also prone to dental problems, so check for signs of tooth decay or gum problems often.

The Shih Tzu Bulldog mix will do well with a high-quality dog food that’s age appropriate.

Being overweight is something to watch out for in a dog who is unable to get a lot of exercise.

Check with your vet if you have any concerns or questions about your dog’s weight.

Dogs that are brachycephalic have a special physiology and particular needs.

When you combine two dogs who have this condition, it could increase the numerous health problems caused by having a short, flat muzzle.

What’s even more concerning is that many breeds’ brachycephaly has become increasingly extreme.

As some breeders attempt to emphasize the attributes associated with this serious condition.

Rather than getting a Shih Tzu Bulldog mix puppy, consider the option of rescuing an older dog.

When you choose to get a dog from a rescue center, you’re not only giving a dog a home, you’re also able to see exactly what kind of dog you’re getting.

If your heart is set on getting a Shih Tzu Bulldog mix puppy, be sure to avoid pet stores and buying online.

These are terrible places where dogs are a commodity.

They are kept in horrendous conditions, fed cheap food, and receive little to no veterinary care.

Needless to say, these poor animals are at an even greater risk of health problems.

Unfortunately, due to the popularity of mixed breeds, unscrupulous breeding continues to be a problem.

Always visit where the puppies live and be sure to see the puppy’s parents.

Reputable breeders will be very knowledgeable and have tested their stock for inherited health issues.

Check out this guide to help you find a puppy.

As mentioned, Bulldogs love to chew.

Here are some chew toys that are specially designed to be easy for Bulldogs to pick up and puzzle toys that will keep them mentally enriched.

Check out these dog foods that are recommended for the Shih Tzu and the Bulldog.

Pros and cons of getting a Shih Tzu Bulldog mix

Before you buy a Shih Tzu Bulldog mix, do some research and consider one of these breeds who have a healthier conformation.

This is a growing list of Shih Tzu and Bulldog rescue organizations.

Is a Shih Tzu Bulldog mix right for me?

Although the American Kennel Club lists the lifespan of the Bulldog at 7 to 10 years, this 2012 Universities Federation for Animal Welfare study suggests it’s somewhere between 4.6 to 6.7 years.

Many of the health problems a Shih Tzu Bulldog mix will face have to do with their structure.

Before you buy a dog who’s been bred with a severe disability, think about adopting from a rescue or shelter where there are many dogs looking for a forever home.

Do you have experience with this mix? Let us know about it in the comments!

Palmer, C. “Does breeding a bulldog harm it? Breeding, ethics and harm to animals,” 2012 Universities Federation for Animal Welfare.