You are here: Home / Breeds / Rhodesian Ridgeback Mixes – Meet The Hybrids Of This Ancient Dog 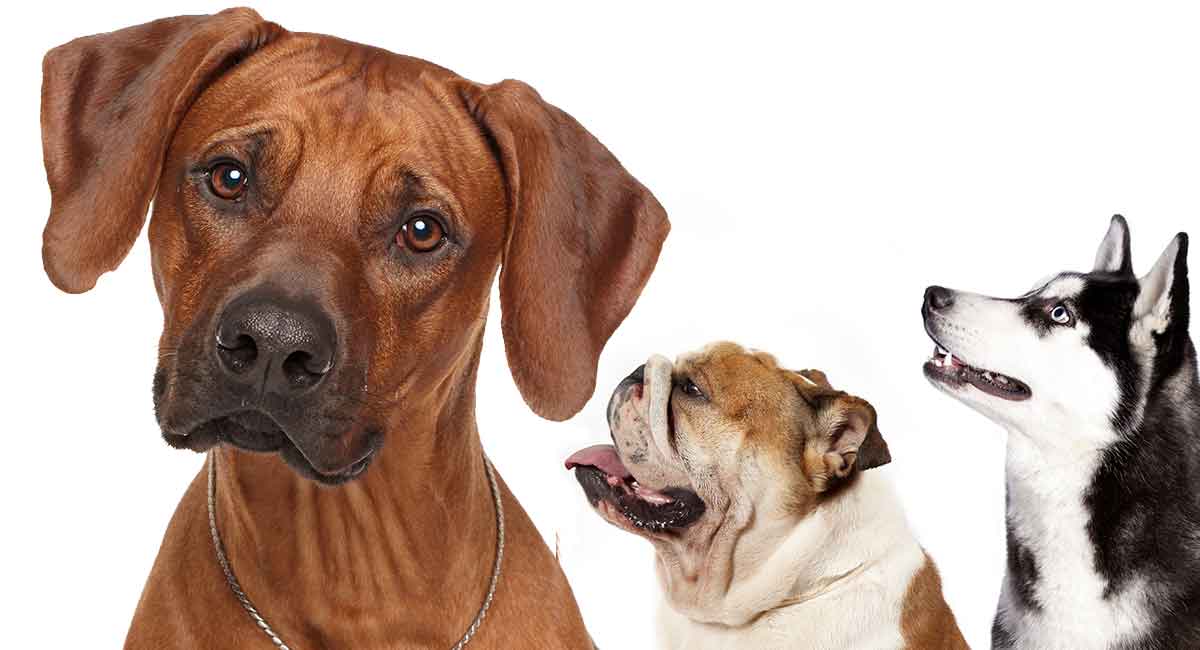 Rhodesian Ridgeback mixes are loyal, intelligent, high energy breeds. Most will be medium to large dogs that share the guarding instincts of their Ridgeback parent and reserve towards strangers. We’ll be looking at the health and personality traits of some of most popular Rhodesian Ridgeback cross breeds. We’ll talk about their exercise and training needs, and likely size and life expectancy. And we’ll help you to decide whether a Rhodesian Ridgeback mix puppy is the right companion for your family!

The Rhodesian Ridgeback originally comes from Rhodesia, the African country now known as Zimbabwe. So it is probably no surprise to learn this dog’s nickname is “African Lion Dog!” The Rhodesian Ridgeback is a truly ancient purebred dog with origins still partially shrouded in mystery. The breed name comes from a distinctive feature – the appearance of a “ridge” that follows the length of the dog’s spine.

Modern genetic science has begun to unravel the mysteries behind the Rhodesian Ridgeback breed’s origins. A 2015 journal article has linked the Ridgeback to the Great Dane and a number of other sizeable working K9s along with a handful of companion breeds.

The Rhodesian Ridgeback stands 24 to 27 inches tall and weighs 70 to 85 pounds. Males are slightly taller and larger than females. The height and weight of a Rhodesian Ridgeback cross breed, will depend partly on the size of the other parent. But these are unlikely to be small dogs!

These dogs are brave and confident! In addition they are loving and affectionate with “their” people but reserved around strangers. They also have an exceptionally strong prey drive, likely born out of their history chasing (but not killing) lions. For this reason, you’ll need to practice a really strong recall with them, so you know they’ll come back when you let them off leash.

The Rhodesian Ridgeback bays like a hound and tracks like one too. In addition, many breeders and canine experts feel these dogs, with their unique background and history, may be more suitable for an experienced owner and trainer.

The Rhodesian Ridgeback’s ridged coat comes in only one color – “wheaten”. The ridge itself is formed by a thin strip of backwards-growing hair that follows the curve of the spine. A trait common in African dog breeds. This dog will shed. However, the short, flat, smooth coat is easy to maintain with basic brushing and the occasional bath.

This dog’s typical lifespan is 10 to 12 years. Health issues Rhodesian Ridgeback owners need to be aware of are:

What is a Rhodesian Ridgeback Mix?

A Rhodesian Rhidgeback mix is any dog that has one Rhodesian Ridgeback parent and another parent from a different breed. They might inherit a lot of the characteristics of the Ridgeback, but they might be a lot more like their other parent. You won’t know until your puppy is born and grows up!

It’s really important that when choosing a Rhodesian Ridgeback mix, you pick one where you like the looks and temperament of both parent breeds. That way however your puppy turns out, you’ll be happy!

Have you arrived here in search of information about a specific hybrid Rhodesian Ridgeback dog? This clickable list can get you there fast!

The Pitbull Ridgeback can weigh 30 to 85 pounds with a life expectancy of 8 to 15 years. This dog will have strong protective and guarding instincts tempered by an equally strong bond with “their” people. This mix dog will shed year-round but is not time-intensive to maintain.

This mix dog will weigh 40 to 85 pounds and can live 10 to 16 years. The AmStaff terrier influence can give this hybrid a personality more suited for family and community life. This dog will be a natural athlete and can really benefit from participation in K9 work or athletics.

The Basenji Ridgeback will weigh 22 to 85 pounds with an average lifespan of 10 to 14 years. This dog brings together the ancient primitive Basenji, the “barkless dog,” with the Rhodesian Ridgeback’s hound-like baying. As a result your dog may or may not vocalize. This dog will be fastidious and largely self-maintaining.

The Rhodesian Boerboel combines a South African mastiff with a South African hound, giving you a dog that can weigh anywhere from 70 to 200+ pounds and live 9 to 12 years.

Both parent dogs will contribute strong protective and guarding instincts and a confident, independent and dominant personality. You can expect moderate shedding with light brushing and grooming duties.

The Border Collie Rhodesian Ridgeback will weigh 30 to 85 pounds and live 10 to 15 years. This dog will have a naturally high energy level and a strong desire to chase, herd, guard and hunt as a result. This dog will definitely shed year-round and seasonally.

A Doberman Ridgeback is definitely a sight to behold! This dog can weigh 60 to 100 pounds of pure, sleek muscle. The life expectancy is 10 to 12 years. This hybrid dog can make an impressive watchdog and a loyal family guardian, certainly with the right early and ongoing training and socialization. The Doberman Ridgeback will shed year-round.

The German Shepherd Rhodesian Ridgeback mix can weigh anywhere from 50 to 90 pounds with a life expectancy of 7 to 12 years. This dog will have innate protective and guarding instincts and unstoppable courage. Consequently, with the right training and socialization, this dog can become a great hunting companion or working K9. Expect both year-round and seasonal shedding with light ongoing brushing and bathing duties.

A Golden Ridgeback will weigh 55 to 85 pounds and live 10 to 12 years. This dog’s temperament will be an intriguing mix of the Golden Retriever’s notable friendliness with the Ridgeback’s natural reserve. One thing you can count on is year-round and seasonal shedding with this pup!

This imposing dog can weigh anywhere from 70 to 175 pounds. The average life span is 7 to 12 years. The Great Dane contributes a patient, friendly demeanour that can certainly mix well with the Rhodesian Ridgeback’s even temperament.

This dog’s size will make early training and socialization imperative in a pet setting. Both parent dogs will shed somewhat year-round and seasonally.

A Greyhound Rhodesian Ridgeback can weigh anywhere from 60 to 85 pounds. This will be a sleek and slim dog with an unstoppable drive to run.

This dog can be challenging to train on a number of levels and as a result may be best for a more experienced dog owner. This hybrid dog will shed somewhat year-round.

The Irish Terrier Rhodesian Ridgeback dog can weigh 25 pounds to 180 pounds. This hybrid dog has a life expectancy of 10 to 15 years.

This hybrid pup’s disposition can range from fiery terrier to independent hound. They tend to be loyal and protective of “their” people and property and can therefore be wary of strangers. If your dog inherits more of the terrier coat type, you may need to hand-strip and trim the coat to keep coat and skin in good health.

The Irish Wolfhound Rhodesian Ridgeback is going to be a big dog with a weight range from 70 to 120 pounds. This dog’s general lifespan ranges from 6 to 12 years.

An affectionate companion canine when well-socialized and trained, this dog’s independent streak can make them a handful in puppyhood. You will have shedding year-round and seasonally with this dog.

The Rhodesian Labrador will weigh 55 to 85 pounds and live 10 to 12 years. This dog receives an interesting mix of personality traits from each parent dog. The Labrador is famously friendly and as a result has been the number one companion canine in America for 26 years straight!

The Ridgeback on the other hand, is a dignified and independent ancient dog breed not recommended for first-time pet dog owners. Expect year-round as well as some seasonal shedding with this hybrid.

This dog will by far be the weightiest pup on this list! Expect an adult weight range of anywhere from 70 to 230 pounds. The life expectancy ranges from 6 to 12 years.

A Mastiff Rhodesian Ridgeback will inherit courage in spades from both parent dogs as well as strong guarding and protective instincts. That is to say this is definitely a dog that will benefit from early and consistent training and socialization. Your dog will shed year-round and seasonally and there may also be some (or a lot of) drool from the Mastiff side!

The Pharaoh Ridgeback combines two ancient dog breeds with hound backgrounds and strong prey drives. This dog will weigh 45 to 85 pounds with a lifespan of 10 to 14 years.

This dog may or may not inherit more of a gentle “pet type” temperament depending on which parent dog dominates. Either way, because of this pup’s high sprinting drive you’ll need to practice recall training with them so that they’ll come back when you let them off leash! This dog’s short, smooth coat won’t shed much and therefore will be largely self-maintaining.

The Redbone Coonhound parent contributes the distinctive and vibrant fire-red coat along with a calm temperament (when not on the hunt). This personality can combine well with the Ridgeback’s more stubborn and independent nature. This dog will shed moderately but coat care is mostly limited to brushing and occasional baths.

Consequently this dog will have a strong protective and guarding instinct coming from both parents, which means early socialization and training will be key to success in a companion canine setting. This dog will shed seasonally as well as year-round.

The Saint Ridgeback may grow up to weigh 70 to 180 pounds. The general life expectancy for this dog is 8 to 12 years. This dog receives different temperament influences from each parent dog.

For instance, from the Saint Bernard comes a loving, loyal and gentle nature. The Ridgeback side on the other hand, contributes a dedicated, independent and protective personality. You will see more shedding from this hybrid dog than many of the others you meet here due to the Saint Bernard influence.

This dog can weigh anywhere from 70 to 110 pounds with a life expectancy of 8 to 12 years. This hybrid dog brings together the racing instincts of the Deerhound, a greyhound-type of incredible size, with the incredibly strong prey drive of the Ridgeback.

Because of this dog’s prey drive, it’s important to practice recall with them before you let them off leash.  This dog will shed somewhat year-round and seasonally.

Is A Rhodesian Ridgeback Mix Right For Me?

We hope you have enjoyed learning about these unique and wonderful Rhodesian Ridgeback mix dogs!

Take care to consider the characteristics of each mix before deciding which dog is right for you and please share your favorites in the comments!