You are here: Home / Breeds / Mix / Pitbull Corgi Mix – Would the Corgi Pit Suit Your Home? 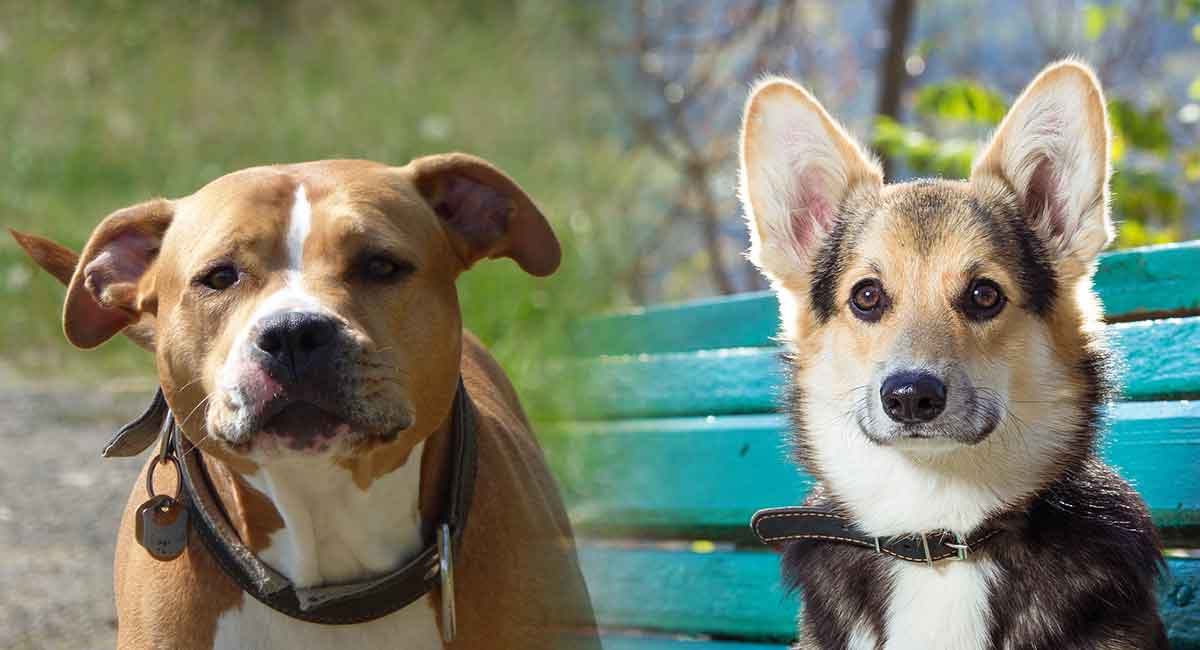 Are you wondering if the Pitbull Corgi mix is right for you?

Also known as the Corgi Pit, this mixed breed dog combines the American Pitbull Terrier with the Pembroke Welsh Corgi.

In this article we’ll take an in-depth look at both parent breeds to help determine what kind of pet the Pitbull Corgi mix makes and if he’s right for you.

Where Does the Pitbull Corgi Mix Come From?

The Pitbull Corgi mix is among a number of unique crossbreeds that emerged in the wake of the popular designer dog trend.

Since the early 1990s, breeding two different purebreds to create innovative new dogs has been taking the canine world by storm.

It’s not hard to be captivated by the diverse style of these modern mutts, but not everyone is so enamored with this practice.

Designer dogs have created plenty of controversy among breeders and dog lovers.

Read on to find out why.

What’s All the Fuss About Designer Dogs?

The practice of crossbreeding has been around for a very long time.

Actually, almost every purebred dog is the result of generations of crossbreeding.

The difference is that first generation crossbreeds like the Pitbull Corgi mix are the direct offspring of two different breeds and have not been refined over time.

A big part of the debate about purebred and designer dogs has to do with inherited health problems.

The poor health that many pedigree dogs suffer from is due to generations of overbreeding.

As the gene pool shrinks, the likelihood of genetic diseases and deformities being passed on to the offspring increases.

While crossbreeding widens the gene pool, there’s no guarantee that the resultant puppies won’t inherit health problems from one or both parent breeds.

And so the debate rages on.

These dogs combined the relentless jaws of Old English Bulldogs with the tenacious courage of terrier breeds.

The resultant dog was for bullbaiting until the blood sport was banned in 1835 and the even bloodier sport of dog fighting emerged.

These dogs were bred to be aggressive but only to other animals.

When they accompanied immigrants to the US, they were working farm dogs and companions.

Although they were named the American Pitbull Terrier by the United Kennel Club in 1898, the AKC renamed them the American Staffordshire Terrier in the 1930s to distance them from their fighting history.

The sturdy, short-legged Corgi can trace their ancestry back to the year 1107.

When Henry I of Britain summoned Flemish master craftsmen, they brought their herding dogs with them to southwestern Wales.

These dogs are believed to be descended from the Swedish Vallhund and other Welsh dogs.

Their low-to-the-ground shape made them ideal for herding.

They could nip at the heels of sheep and cattle without getting kicked.

The Corgi Pit is a medium-sized dog who will typically stand from 17 to 19 inches and weigh from 30 to 50 pounds.

Although there is no breed standard, many of these dogs combine the compact athletic build of the Pitbull with the longer muzzle of the Corgi.

However, when you mix two different breeds, there’re no guarantees.

The best way to get an idea of what your Pitbull Corgi mix could look like is to look more closely at each of the parent breeds.

The muscular Pitbull stands from 17 to 19 inches and weighs from 40 to 70 pounds.

While their ears are naturally floppy, many owners opt to have them clipped.

Their coat is short, glossy, and comes in a variety of colors and patterns.

Despite their short stance, their legs are muscular, making them remarkably quick and agile for a dog who’s built long and low.

The Corgi’s thick, medium-length coat sports a water-resistant undercoat and a longer, coarser outercoat that can be wavy or straight.

Coat colors are red, sable, fawn, and black and tan, with or without white markings.

As with appearance, it’s impossible to predict the temperament of your Corgi Pit.

We need to look at the personalities of the two parent breeds to get a better picture.

Despite the bad press and a history of violence, those who know him best describe the Pitbull as good-natured, loyal, and smart.

As long as the dog is properly socialized and responsibly bred, they are trustworthy.

This 2011 study found no evidence of greater aggression among Pitbulls compared to other breeds.

That being said, this is a strong-willed dog with a mind of his own, and he can become destructive if bored.

Due to their background, the Pitbull shouldn’t be left alone with other dogs.

Your Corgi Pit may have a strong prey drive if they take after the Corgi parent.

They might also inherit a powerful instinct to herd things – including nipping at the heels of a fast-moving toddler.

Early socialization with a wide array of people, children, and other dogs and animals is the best way to discourage this behavior.

Pembroke Welsh Corgis may have a tendency to be territorial.

These bright, curious, comical, loyal, and outgoing dogs are also an excellent companion.

Early socialization and puppy training classes are recommended for a dog with physical strength, high energy, and a strong will.

Both parents tend to want to do things their own way, but they are also intelligent and have a desire to please, so it is possible training could go quite smoothly.

Always use positive reinforcement techniques and be sure to praise them when they do something correctly.

Pitbulls sometimes have a tendency to chew and dig: behaviors you’ll want to nip in the bud.

Some Corgis are barkers, but can be trained not to do so.

Your Pitbull Corgi mix will require a moderate amount of daily exercise.

As the offspring of two intelligent breeds, they may enjoy taking part in canine sports like agility training and obedience tracking.

Like appearance and temperament, the Corgi Pit will be susceptible to genetic health problems from both parents.

The Pitbull parent should be genetically tested for a brain disorder known as cerebellar ataxia.

It appears between the ages of 3 and 5 and causes a progressive decline in muscle coordination and voluntary movement.

Pitbulls are also subject to a number of skin and coat allergies, including atopic dermatitis or eczema.

Recommended health tests for the breed include:

The Corgi’s distinctive short legs are the result of chondrodysplasia.

Although extremely endearing, this causes them some serious health problems.

Elbow and hip dysplasia is a condition in which the joints haven’t developed properly and can lead to arthritis.

Degenerative myelopathy is an incurable, progressive disease of the spinal cord that inevitably results in hind leg paralysis.

If your Corgi Pit has the short, stiff Pitbull coat, it’ll be easy to care for with a weekly brushing.

However, the longer double coat of the Corgi requires more care.

They shed regularly and quite a lot twice a year.

Do not bathe your Pitbull Corgi mix unless they absolutely need it.

Bathing can break down the natural oils in their coat.

Check their ears weekly for any signs of infection and brush their teeth regularly as well.

The Corgi Pit will require a high-quality, age-appropriate dog food.

As both parents are susceptible to becoming overweight and getting hip dysplasia, calorie consumption should be monitored.

That also includes treats during training.

Both the Pitbull and the Corgi are intelligent, loyal, loving, friendly, and eager to please.

However, due to the structural health problems associated with the Corgi, we cannot recommend this dog as a family pet.

If you’ve already decided this is the dog for you, consider rescuing an adult.

Rescue dogs are much less expensive than going the breeder route.

You’ll also be able to see exactly what kind of dog you’re getting.

Check out this article to find out more about rescuing a Corgi Pit.

Mixed breeds like the Pitbull Corgi mix are more popular than ever before.

This is both good and bad news for dog lovers.

On the one hand it makes it easier to find the puppy of your dreams.

But it also increases the number of unethical breeders out to make money off of mass-produced dogs.

Avoid getting a dog from puppy mills.

These commercial breeding facilities supply most of the dogs in pet stores and online.

A reputable breeder should allow you to visit their home or kennel and see the puppy’s parents.

These breeders are the best option for finding a happy, healthy puppy.

They will have health tested their breeding stock for genetic conditions and be happy to share the results with you.

Read this article for more information on finding a puppy.

Pippa Mattinson has amassed a wealth of experience in the 40 years she’s been working with dogs.

Her training guides offer clear and detailed dog training lessons and exercises for puppies and dogs of all ages.

These toys designed for rambunctious Pitbulls are made to stand up to their awesome jaw strength.

Dog beds for excessive chewers need to not only be tough, but made of materials that are safe if ingested.

Pros and Cons of Getting a Pitbull Corgi Mix

There’s been a lot to digest in this article, so let’s sum up some of the key points.

These are rescues that specialize in Pitbulls and Corgis.

If you know of any rescue centers to add to the list, let us know in the comments below.

Is a Pitbull Corgi Mix Right for Me?

The Pitbull Corgi mix has oodles of personality and some excellent qualities.

However, it’s hard to endorse a dog who has structural problems.

If you feel this is the dog for you, look for a puppy who doesn’t have the short legs of the Corgi.

Let us know what you think in the comments below.

MacNeil-Allcock A, et al., “Aggression, behaviour, and animal care among pit bulls and other dogs adopted from an animal shelter,” Universities Federation for Animal Welfare, 2011