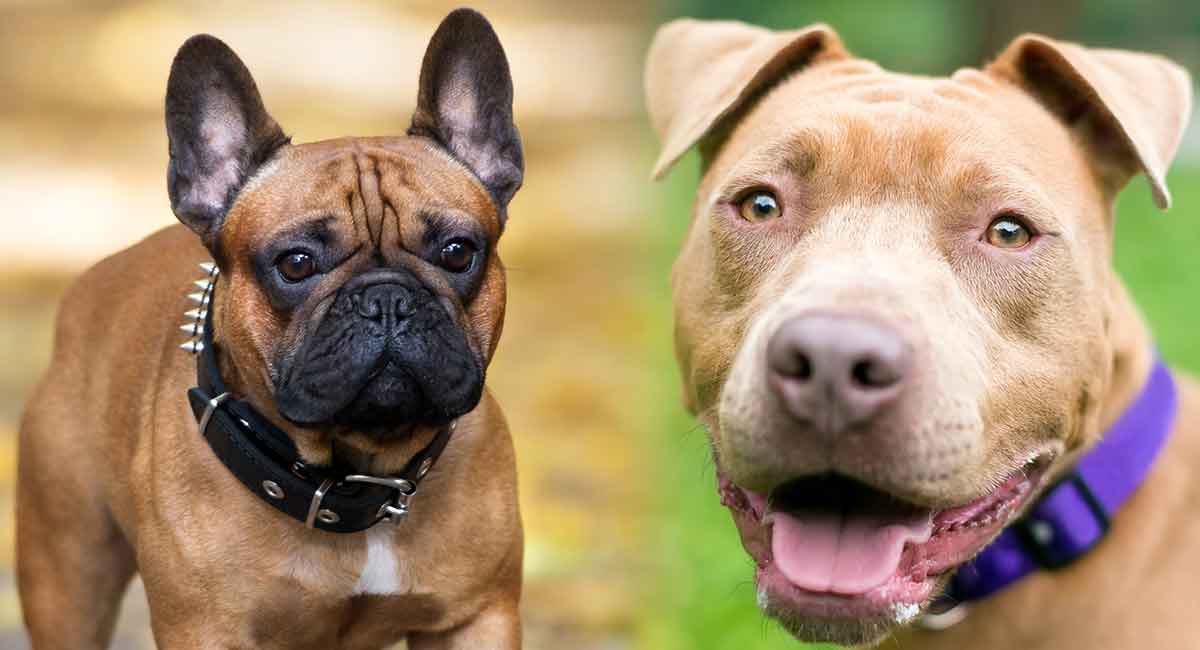 But what can you expect from this mixed breed dog?

Will they have issues with aggression? Are they healthy?

Keep reading and we’ll answer these questions and more.

Where Does the French Bulldog Pitbull Mix Come From?

Crossing two different purebred dogs like the French Bulldog and the Pitbull creates what’s commonly referred to as a “designer dog.”

These hybrid pooches have caused quite a commotion in the canine world. Some will say that breeders are simply cashing in on a trend.

However, designer dogs have been around since at least the early 1990s. Their ever-increasing popularity suggests they’re around for the long haul.

When you combine two different dogs it’s a flip of the coin as to which parent’s appearance, temperament, and size will be reflected in the puppies.

Purebred proponents stress that they know which health tests to give their dogs to reduce the chances of genetic health problems. They also claim that hybrid dogs taint the bloodline of a breed.

However, there is an argument that expanding the gene pool is the best way to eliminate a dog suffering from inherited diseases and deformities.
This is known as hybrid vigor.

We don’t know exactly when the French Bulldog and the Pitbull were first crossed, but looking more closely at each of the parents will tell us about more the offspring.

Originally it was a toy-sized Bulldog who gained popularity among the lace workers in Nottingham, England.

When the industry relocated to northern France, they brought their petite pups along with them.

Over time, the toy Bulldog was crossed with other breeds, most likely Terriers and Pugs.

This is when their iconic bat ears were developed.

When they eventually made their way to Paris, they became extremely popular and were closely associated with the city’s café lifestyle.

They first appeared in America at the end of the 19th century.

Although the Pitbull also originated in England, their history is much less pleasant.

These dogs were created by crossing Terriers and Bulldogs for the purpose of fighting staked bulls.

Thankfully, blood sports were banned in 1835.

American breeders developed a larger dog than the English version that was used as a working farm dog.

However, even today the Pitbull is plagued by its reputation as a tough, and even violent breed.

The French Bulldog’s most famous feature is their distinctive “bat ears”. Originally, their ears were “rose-shaped,” more closely resembling those of the English Bulldog.

During the era known as the “belle époque,” the French Bulldog was the favored companion of Parisian “belles de nuit,” or ladies of the evening.
Pitbulls appeared on the cover of Life magazine 3 times; more than any other dog breed.

Although their jaws are very strong, the Pitbull does not have “locking jaws.”

French Bulldog Pitbull mix puppies can look like one parent more than the other or be a mixture of the two.

These dogs have a few similar physical traits. As a result you can expect their offspring to have a compact, muscular physique, a large head, and a short coat.

The French Bulldog comes in white, cream or fawn whereas the Pitbull is seen in all colors and patterns.

The French Bulldog stands from 11 to 13 inches and weighs under 28 pounds.

American Staffordshire Terriers are considerably larger, standing 17 to 19 inches and weighing between 40 and 70 pounds.

The Frenchie resembles a miniature version of the English Bulldog, but with the signature erect “bat ears.” Like their larger cousin, they have an oversized square head and an extremely short muzzle, which signifies being a brachycephalic dog.

This causes some severe health problems, which we’ll look into shortly.

The Pitbull has a well-defined jaw and cheekbones and wide set dark eyes. Although extremely muscular, he’s very agile and graceful in his movements.

To find out the type of behavior you can expect from your French Bulldog Pitbull mix, we’ll look to both parents.

Since French Bulldogs were bred to be lap-dogs, they’re usually, loyal, playful, and loving. They love people in general and enjoy being the center of attention.

However, there are some Frenchies who can be stubborn.

Despite a violent past and much censure, the Pitbull is often found to show no more aggression than other breeds.

In fact, this dog wasn’t bred to be antagonistic towards people; only other dogs.

Early socialization and training is important for any dog, but for one who will be as strong and powerful as the French Bulldog Pitbull mix, it’s crucial.

Unless they’re raised together, bringing them into a home with other pets could potentially pose a problem.

Due to the natural instincts, it’s important to never leave them alone with other dogs.

When it comes to training, both parents are smart dogs who love to please, but can have a stubborn streak. This means training could go either way depending on the individual animal.

Like all dogs, they’ll respond best to positive reinforcement training. This means plenty of praise or treats when they perform properly.

Early socialization will accustom them to a wide variety of people, pets, and environments. This is the best way to ensure they’ll grow to be calm and well-adjusted.

The Pitbull can be prone to chewing and digging, especially if left on their own too much.

Exercise requirements vary quite a bit between these two breeds. A short daily walk or outdoor play session is enough for the Frenchie. Their flat face means they often have serious breathing issues.

For this reason, they cannot be over-exercised and shouldn’t be outside at all when it’s hot and humid. The right exercise regimen for your Frenchie will depend on his conformation.

On the other hand, the Pitbull is much more athletic. They require a lot of exercise and since they’re so people-oriented it should include long play sessions with their owner.

These smart dogs will often do well in canine sports.

Unfortunately, the poor French Bulldog has more than his fair share of health concerns and many of them are a result of how they look.

As mentioned, being brachycephalic makes breathing difficult, but it also brings about other health concerns, including eye disorders like corneal ulcers, and dental problems.

French Bulldogs also have chondrodystrophy, a form of dwarfism defined by their short legs.

This puts them at a high risk for intervertebral disc disease, which can cause pain, nerve damage, and in severe cases paralysis.

That little corkscrew tail that looks so cute is known as screw tail and it can also cause severe back problems in the breed.

In terms of health, the Pitbull fares much better, but is still predisposed to certain conditions.

Grooming your French Bulldog Pitbull mix is as low maintenance as it gets.

Their very short coat will only require weekly brushing to remove dead hair and to distribute natural oils that keep their coat healthy.

If your puppy has the facial folds of the Frenchie they should be kept clean and dry to avoid infections.

As with all breeds the French Bulldog Pitbull mix requires a good quality food that’s appropriate to their age.

Both these breeds are prone to obesity, so be careful with calories, including treats when training.

Extra pounds will put this dog at a higher risk for the aforementioned conformational problems.

Buying from breeders who selectively breed for extreme brachycephaly is of course detrimental to the dog.

So, if you feel this is the dog for you, think about rescuing an older French Bulldog Pitbull mix.

There are many reasons to adopt an older dog.

Not only will you get to see exactly what the dog will look like, you’ll also get a look at their personality.

Some may already be house-trained and they’re almost guaranteed to be less expensive than buying a puppy.

Dogs end up at rescues for all sorts of reasons and some of them are very sad.

Rescuing a dog means you’re giving a deserving animal a second chance with a new family.

If a French Bulldog Pitbull mix is your heart’s desire, then seek out a responsible breeder.

As mixed breeds of all types are increasingly popular, you may have more choice than you think.

Avoid buying a puppy from pet stores as they are almost always stocked with dogs from puppy farms.

These dogs often receive inhumane treatment and have a greater chance of health and behavior problems.

This guide will give you more information about finding a puppy.

Raising a dog is extremely rewarding, but it also requires a lot of work.

This puppy care guide covers all of the development and growth stages and can help with everything from potty training to biting issues.

A French Bulldog harness puts less pressure on their neck and reduces the risk of injury. It also serves as an excellent training tool.

These extra durable toys were designed with Pitbulls in mind.

From pajamas to chew toys, there are great Pitbull gifts for your Pitty.

The best dog food for Frenchies will help your mix if it has a shorter muzzle.

Pros and Cons of Getting a French Bulldog Pitbull Mix

Here’s a brief summary of the joys and trials of owning a French Bulldog Pitbull mix.

Here are some similar, but healthier Pitbull mixes to consider:

These are rescues where you may be able to locate a French Bulldog Pitbull mix. If you know of similar rescue organizations, please post details in the comments box below.

Is a French Bulldog Pitbull Mix Right For Me?

By all accounts this should be a dog suitable for many families as long as there isn’t another dog in the home.