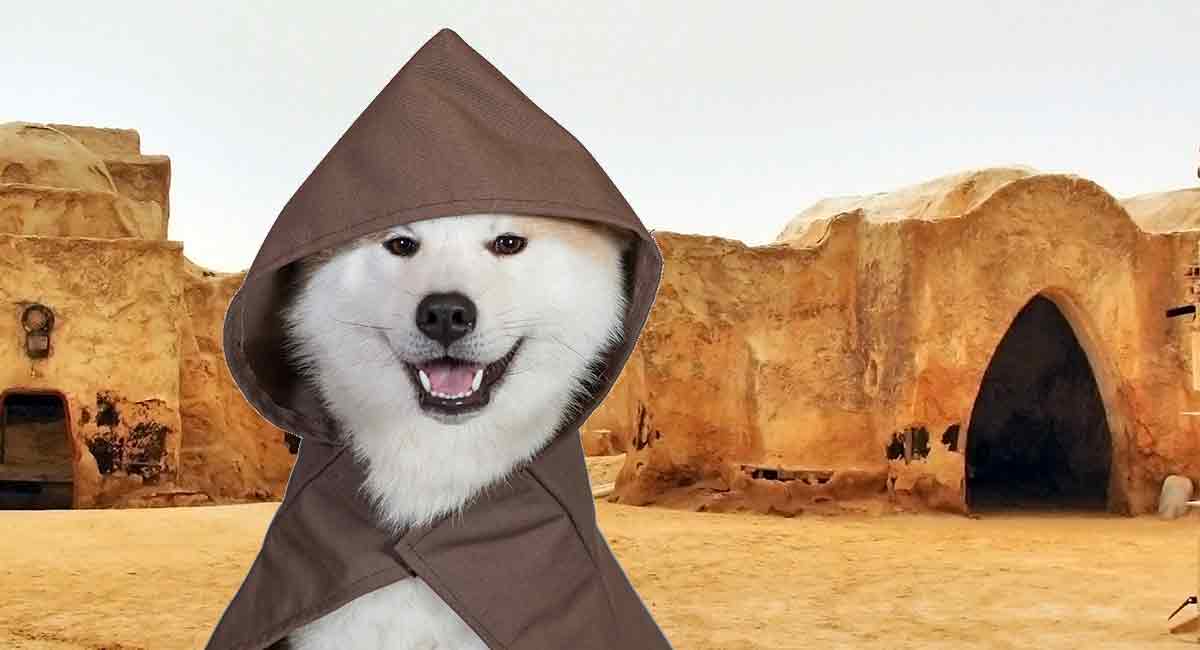 Star Wars dog names are as cool, unique and varied as the characters and settings themselves. It’s the series that’s bound generations together. So it’s no surprise that Star Wars is one of the most successful movie series of all time.

It has launched countless spin-offs, including video games and animated series, and references to comic books. Of course there’s also a never-ending plethora of products, such as battery-powered lightsabers and Halloween costumes. If you want to name your new canine sidekick after your favorite movie series, this article will give you a wealth of creative Star Wars dog name ideas to try on for size.

One of the most awesome aspects of the Star Wars series is how frequently underdogs rise to become heroes. In other words, if they are smart, scrappy and courageous, they may just have a bright future in the Star Wars universe.

This describes rescue dogs so well, doesn’t it? Maybe the beginnings weren’t so great, and maybe they had a few false starts along the way. But with perseverance and hope, that perfect “fur-ever home” is still waiting ahead. After all, puppies start out life as pure potential covered in fur (and cuteness, of course).

Along the way, we hope these timely naming tips may help you pick out the perfect Star Wars dog names from the lists here. Try to avoid naming your dog any name that sounds too similar to major training commands. This can keep frustration during training to a minimum.

Consider whether the name you pick will be short and easy enough to say many times each day (or can be shortened to a quick, easy nickname for daily use). Be sure you feel comfortable yelling out your dog’s new name in public and around total strangers.

Naming pets after Star Wars characters is quite popular today. After all, the Star Wars cast of characters is always expanding, always colorful, always inventive and original—just like plot twists and turns.

However, some Star Wars names have risen to the top of the pack, so to speak, whether due to the long history of the Star Wars movie franchise, the popularity of certain characters or the ease of spelling and saying particular names. This list represents some of the best Star Wars dog names and the ones that are the most popular today.

Star Wars has always featured a colorful cast of male leading and supporting characters. You may find your dog’s new name in this list of male Star Wars dog names.

For even more great male dog names, be sure to have a look at this comprehensive article.

Is it cool to name your canine after a droid, a starship, a movie director, a movie actor or a fictitious planet? These cool Star Wars dog names may convince you that it is very cool indeed.

Looking for more cool dog names? This article has plenty of them.

This list of cute Star Wars dog names comes from some of the lesser-known cast of characters in the series and spin-offs.

To discover more cute dog names for both male and female dogs, hop on over to this curated article.

Many of the people, places and things in Star Wars have such interesting, creative and unique names. These unique Star Wars dog names take their cue from the wealth of naming originality in the series itself.

Craving even more unique dog names? This article has just what you are looking for.

Star Wars has some pretty tough characters on both sides of the Force fence. While some Star Wars characters are clearly portrayed as bad or good, far more characters have subtle nuances that always keep you guessing.

Darth Vader, the father of Luke Skywalker and Princess Leia Organa, is a perfect example. These tough Star Wars dog names take their inspiration from some of the toughest, strongest, most powerful leaders of the Rebel Alliance and the First Order.

For even more brainstorming ideas, check out this list of tough dog names.

While there are no canines, per se, in “Star Wars,” there are touching interspecies alliances, friendships and partnerships. These are part of what makes the movies feel so real.

Clearly, there are heartfelt connections between droids R2D2 and C-3PO. The teacher-student connection between Luke Skywalker and Yoda. And even the pseudo-romantic crush that appears between a young Lando Calrissian and his droid co-pilot, L3-37. If no dogs exist in Star Wars, the movie is the poorer for it, but you can help remedy that by naming your pooch after your favorite Star Wars character.

Which Star Wars Names Are Your Favorites?

So there you have it—a long list of some of the most creative names in the galaxy. Now it is up to you to choose the perfect Star Wars name for your fur sidekick. Let us know in the comments below which Star Wars dog name is your favorite and why.