You are here: Home / Breeds / Cutest Dog in the World – Let’s Find Out Who Wins 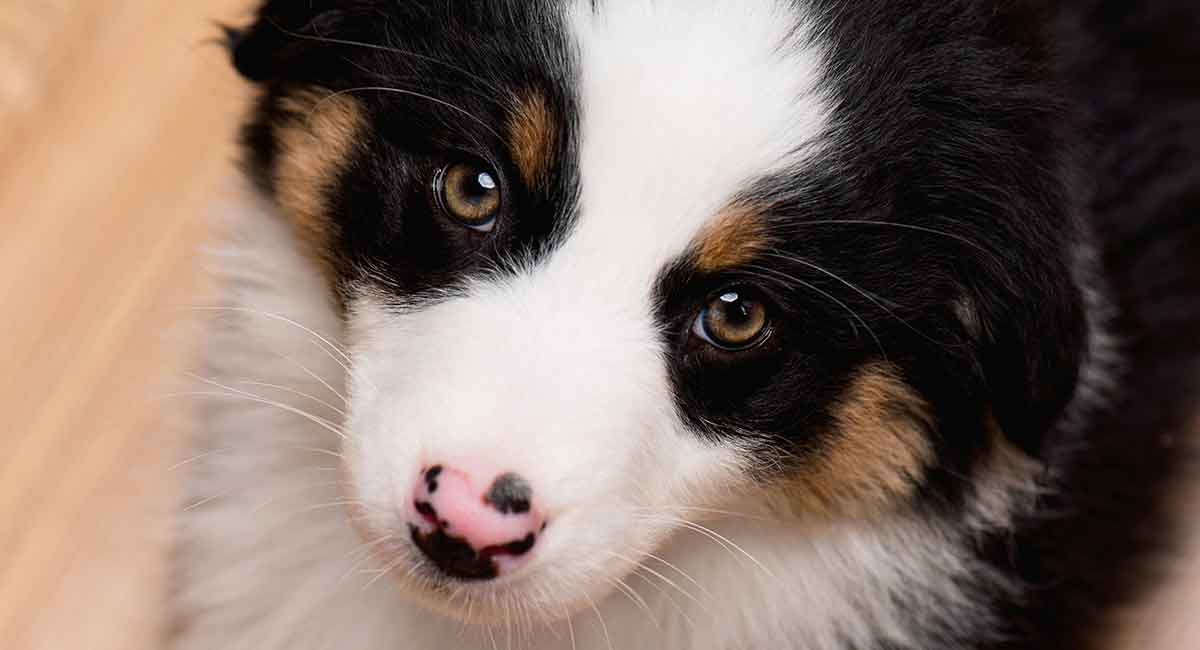 One reason we love dogs is that they’re just so darn cute, but how do you judge the cutest dog in the world?

How can you resist?

And who decides what’s cute, anyway? Everyone thinks different parts of puppies are cute. Although we all find some traits appealing. So let’s investigate cuteness.

We’ll also look at cute dog breeds with names you might know that are, by any standard, contenders for the top cutest dog breeds in the world.

The Science of Cuteness

Okay, it’s true that “cute” is in the eye of the beholder.

We all have different ideas about what it means.

But that doesn’t mean we haven’t tried to define it, anyway!

Besides, there is a certain function to canine cuteness, scientists think. Can science predict the cutest dog in the world?

Cuteness might be beneficial to our relationships with dogs. Helping us build stronger bonds.

And since dogs are mostly bred for human companionship these days, that’s a big plus.

A study from 2015 found that the perceived cuteness of dogs made people think those dogs have other desirable personality traits.

Also, the study said having a good relationship with the dog makes us think it’s cuter!

That’s probably why we each think our dog is the cutest dog in the world.

Humans tend to think that child-like traits are cute.

Baby-like behavior makes us want to take care of other creatures.

Plus, animal features have been shown to affect emotional responses in children.

That is partly why, researchers believe, domesticated animals tend to show infantile behavior even into adulthood.

The cutest dog in the world probably has some puppyish traits, even in adulthood.

This quality is called neoteny. It is probably genetically passed down through selective breeding.

Another term, baby schema, refers to certain baby-like characteristics. These include a large head, large eyes, and a small nose and mouth. They trigger caring behaviors in others.

The response to this is called the baby schema response, or cute response.

It makes us want to pay attention, protect, and show a lack of aggression to things that show baby schema.

So this is all good, right?

Dogs look cute to us, so we want to take care of them.

Breeding for Cuteness – Why It’s Not the Best Thing

There is a dark side to all this.

Humans then try to breed animals to remain cute all their lives. No matter how old they get.

The pursuit of such qualities can lead to health problems.

Breeding for appearance can exaggerate normal functioning dog traits until they are no longer useful.

Plus, dogs bred only for looks may be less balanced in personality.

Conditions This Can Cause

Dogs bred for cuteness may suffer from issues like:

The Cutest Dog in the World

Top candidates for the title of the cutest dog in the world:

But which match cute features with great personalities and good health?

The super-fluffy Keeshond is an older breed. It is desired as family companions and watchdogs.

They have gentle, intelligent dispositions and love children.

The name Keeshond is Dutch.

These pups are like big, adorable furballs with their long hair and quirky personalities.

Australian Shepherds are incredibly smart canines with plenty of endurance.

Bred as cattle dogs, they have a strong herding instinct and a ton of energy.

They also have cute floppy ears and expressive faces.

But don’t let them get away with things! Because they can outthink most of us given half the chance!

The merle pattern that some people think is beautiful can cause medical problems.

This includes deafness and blindness.

It is especially true in double merle dogs – those that have received the merle gene from both parents.

Some problems you may see in them include:

Plenty of people love these fun little dogs, with their huge ears, and their small but long bodies.

They are sensitive, smart and make good companions.

They also act as family companions.

Unfortunately, these dogs are small because of chondrodysplasia.

That is the form of dwarfism that gives them their trademark big heads and normal-sized bodies but stubby legs.

They are prone to

The Golden Retriever is originally from Scotland. It was bred for retrieving in that climate and terrain.

They are eager to please, calm, and sweet.

They’re cute because of that rich golden color, long wavy hair, and their big smiles!

Golden Retrievers have a less diverse genetic pool than some breeds. This is due to overbreeding from one purebred stud.

Cancer is a major issue as a result, but they are also prone to:

Interestingly, these big, beautiful dogs were developed first as companions for European royalty.

But they have worked on farms, pastures, and waterfronts, doing tasks like cart-pulling, herd protection, and guarding.

With their gorgeous fur and gentle expressions, you can see the appeal!

The giant Leonberger is calm, good-natured, and surprisingly graceful.

As such a big dog, the Leonberger doesn’t live too long.

The breed is prone to

There’s also a condition called Leonberger polyneuropathy. This is a neurological order specific to the breed.

Oh, a puppy has to be the cutest dog in the world, right?

Which breeds have the cutest puppies? Here are a few…but not enough!

The Lab is a wonderful all-purpose dog. Once bred for retrieving waterfowl, it is now America’s most popular dog for 28 years running.

These outgoing dogs are laid-back and eager to please.

Plus, the puppies are so cute with their floppy ears and those pudgy little bodies!

lare healthy but prone to obesity and related conditions.

They are genetically inclined to:

Right behind the Lab in popularity is the German Shepherd.

These dogs were originally bred to herd and protect livestock. But they became popular as police and military dogs.

They are smart and cooperative. And those ears!

The puppies are even cuter, since they haven’t even grown into the ears yet.

German Shepherds are prone to:

As cuteness has become more important, GSDs have developed back conformation issues.

It causes problems because of a steep curve.

Poodles are an old breed, used originally as a water retriever, then bred to grace the courts of Europe.

Poodles, whether Standard, Miniature, or Toy, have gorgeous coats.

The Toy and Miniature varieties (not a separate breed) were bred as hunters. And then to be better companions for humans. Their cuteness is definitely part of that!

These are active, intelligent, sensitive dogs. They are loving to their owners but not quite as outgoing as some.

And the puppies are so cute and bouncy, with their sweet faces and curly fur!

Although they are prone to some genetic issues, such as

Cute small dogs are adorable because of their small size and big personalities.

Here are some of the breeds we adore!

They are clearly contenders for cutest dog in the world.

Yorkies are a relatively new breed. They were originally bred for catching rats in mines and to burrow after badgers and foxes.

They started becoming more ornamental as lapdogs in Victorian times.

These dogs are cute because of their silky hair and their feisty spirit.

They are active, alert, and bold.

But they have gotten smaller over the years because of the demand for accessory dogs.

They are also a popular show dog.

Still, their genetic pool is limited because one show dog is the ancestor of many Yorkshire terriers.

They do suffer from problems associated with their size, such as

Other conditions they are prone to include

The mischievous and affectionate Pugs are often used as the poster-dog for cute.

They are an ancient breed bred as companions for the wealthy in China.

But they are not healthy dogs.

And the baby schema that many people love (big eyes, little nose, flat face) hides a multitude of issues.

Pugs overheat easily because their short muzzle keeps them from regulating their own temperature.

These issues can affect their lifespan.

The long, flowing coat of the Cavalier King Charles Spaniel makes many people think it’s a contender for the cutest dog in the world.

These sweet pups are people-centric and laid-back.

They have long been the favorites of aristocrats since King Charles I’s day.

This means they have been bred for their looks for many generations.

They have the brachycephalic muzzle. This can cause them respiratory, digestive, and oral issues, among other conditions.

Plus, breeding for that small head has made these adorable dogs prone to syringomyelia.

That is a serious condition in which the brain doesn’t quite fit.

So, the brain blocks cerebrospinal fluid from going down the spinal cord.

They may also be prone to

The Papillon is named after those beautiful silky ears (papillon is French for butterfly).

These tiny toy dogs are delicate, friendly, and high-energy.

They were descended from hunting spaniels but were bred themselves as court companions.

Papillons were refined for longer hair, high-domed heads, and feathering on their tails and ears.

But, their health does not seem to suffer. They are generally a long-lived breed.

Their health issues include many that you find in small dogs. Such as patellar luxation and progressive retinal atrophy.

They are fragile and tend to hypoglycemia.

They may also experience

Papillons are born with a soft spot in their skulls that eventually closes up.

These little guys are loyal, protective, and fun.

Dachshunds can be long-lived if well cared for.

But breeding for those little stubby legs and long body has come at a cost.

These sweet pups suffer from intervertebral disc disease. This causes back pain in dogs that are not very old.

It’s a side effect of chondrodystropy, which is the form of dwarfism that they have.

Cutest Dog Breeds in the World

What’s the cutest dog ever?

You’re thinking, how could we not mention the Pomeranian, the Maltese, the Bernese Mountain Dog, the Mastiff…sigh.

We so want to!

But we’re sure you have opinions on what the cutest dog in the world is, too.

And it’s probably the one living in your house.

So tell us all about it in the comments! Which one gets your vote?

Burke, A. What Was the Pug Bred to Do? American Kennel Club.

Keeshond Club of America, About the Keeshond.

References and Resources for Cutest Dog in the World Continued

Papillon Club of America, A Brief History of the Papillon.