You are here: Home / Breeds / Mix / Chow Chow Mix Breeds and Their Traits 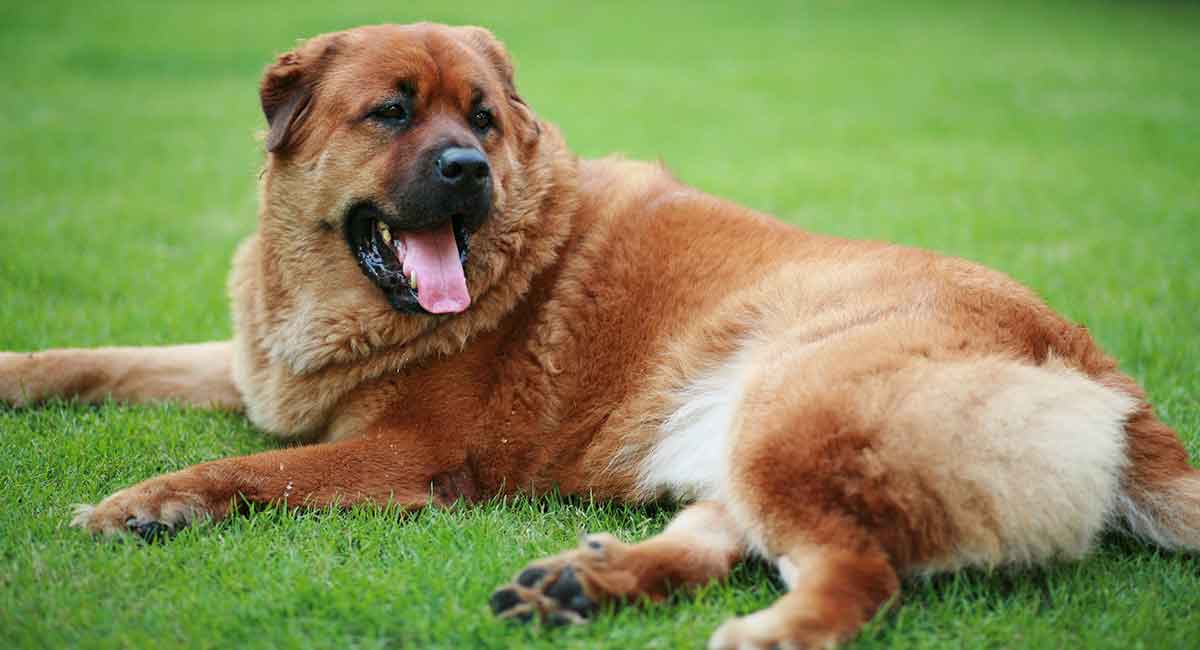 Chow Chow mix dogs are affectionate, loyal and intelligent. But their exact personality and behavioral traits will depend on who their Chow Chow parent was mixed with. These hybrid designer dogs do however tend to be fairly large, confident and stubborn, just like their Chow ancestors. Today we’ll share the top Chow Chow mix breed puppies available right now, and help you to decide whether a Chow Chow mix if the right choice for your family and lifestyle.

The Chow Chow is a powerful dog. They can grow up to 21 inches tall, and weigh between 44 and 70 pounds. Chow Chows need good early socialization and positive reinforcement training. They can be strong-willed and have a history as working dogs. But if you throw something else into the mix, the results can be very different.

The Chow Chow is an ancient working Chinese dog. The breed is one of the world’s oldest, and has been around for over 2,000 years. It dates back to the ancient Han Dynasty in 150-206 B.C.! These pups were originally bred for use as a sporting dog and were used by the Chinese aristocracy to hunt game birds.

The Chow Chow is sturdy and well-built with a characteristic high-set tail. These pups have large, square heads and short, deep muzzles.

One of the Chow Chow’s unique features is a blue or black tongue! They can be solid-colored, or they may have patches of color. Chow Chows have a double coat. The undercoat is soft, and the top coat is either rough or smooth. Depending on their other parent’s coat type and colors, your Chow Chow mix could look an awful lot like a purebred Chow.

There are several Chow Chow cross bred dogs that are gaining popularity at the moment. Today we focus in on those which you are most likely to come across as a potential puppy buyer.

Friendly, calm, and easily trainable, Labs make wonderful family pets and are also awesome working field dogs. The Lab Chow is a calm, even-tempered mix that makes a good family dog. They are excellent guard dogs, and bark to alert you to the presence of strangers around your home.

Lab Chows have dense, fluffy coats that require frequent grooming. They have the furry mane of the Chow Chow with the long face of the Lab.

These are big dogs, weighing up to 70 pounds. They also need lots of outdoor play and exercise. If you take on one of these pups, you can expect your new fuzzy, furry friend to be around for between 9 and 12 years.

The Chusky is a mix between a Chow Chow and a Siberian Husky. The Siberian Husky is a traditional working dog that hails from the frozen north where it was used for transporting heavy loads of goods and provisions between settlements.

Huskies make devoted pets but will require early socialization if they’re to mix well with other pets. Chuskies are highly intelligent, playful dogs that can be very protective of their human family. They do get on well with other dogs provided they are well-socialized as puppies.

Both the Chow Chow and the Husky are working breeds, so that the Chusky will need lots of stimulation and a moderate amount of exercise. A full-grown Chusky can weigh up to 65 pounds.

Chuskies have black noses and faces that are typically more like a Husky than a Chow Chow. Be prepared for some heavy shedding! And you’ll need to have your Chusky’s thick coat trimmed by a professional groomer during hot weather.

You must be prepared to groom your Chusky’s heavy, double coat at least twice a week to keep it in good condition. Some Chuskies may suffer from a rare dental condition that causes teeth in the middle of the sides of the mouth to be missing.

The Chow Pei is a cross between a Chow Chow and a Chinese Shar-Pei. The Shar-Pei hails from Canton, China. The name is thought to be derived from the Cantonese word, meaning “sand skin,” referring to the breed’s short, rough coat.

The Shar-Pei was initially bred to be a herding and guarding dog. The Chow Pei is an intelligent dog with a regal, dignified persona. These pups make great family dogs and are good with children if they are treated correctly.

The Chow Pei typically has a long, soft coat that requires regular brushing. This cross-breed requires plenty of exercise every day but is equally happy living the city or country life.

Often, this Chow Chow mix has loose, wrinkled skin on their head and neck, resembling a Shar-Pei head on a Chow Chow body! These are medium-sized dogs, reaching around 20 inches tall and weighing up to 60 pounds.

Although the Chow Pei can live to be 15 years of age, he may suffer a few health problems during his lifetime. The Chow Pei can be prone to entropion. This condition requires attention from a vet every few weeks, although it may be corrected by surgery.

The Chow Hound is a cross between a Chow Chow and a Basset Hound. The sweet-tempered, affectionate Basset Hound is short-legged and floppy-eared, making a great family pet. The Basset is a scent hound, originally bred for hunting hares.

This cross-breed pup makes a beautiful family dog, and they’re usually great with kids! The Chow Hound is a smart, friendly dog that makes a perfect companion.

This breed is small in stature, like a Basset hound. The fur is soft like the Chow Chow and takes moderate grooming to keep in good shape. The Chow Hound can be brindle or brown.

The Chow Shepherd is a cross between a Chow Chow and a German Shepherd. German Shepherds were orgiainlly herding dogs, but are now used by the police and military too.

The Chow Shepherd is an intelligent, reserved personality with an independent spirit. These pups are protective like a German Shepherd, but friendlier with strangers than a purebred.

If you have other pets, a Chow Shepherd might not be the best dog for you. These pups can be okay with children, but some may be short-tempered and snappy. The Chow Shepherd would make a great dog for a single person or a couple.

You’ll need to brush your Chow Shepherd regularly, especially when they’re shedding during the summer and winter. They have long, thick coats that can be coarse and profuse. The Chow Shepherd needs about half an hour’s exercise every day.

These are quite big dogs, reaching 23 inches tall and weighing around 80 pounds. They are sturdy, powerful, and muscular in build. Generally, these dogs are healthy, with a life expectancy of around 12 years.

The Pitchow is a cross between a Pitbull and a Chow Chow. The American Pit Bull Terrier had its origins in the British Staffordshire Bull Terrier. It was used in the 1800s for blood sports, such as bull baiting.

When such sports were banned, the Pit Bull was used in the U.S. to catch semi-wild cattle and hogs, to drive and hunt livestock, and as a family companion. Pitchows are typically playful and independent.

Although they are good with members of the human family, they can be very wary of strangers and are not always great with other dogs. They aren’t big fans of kids generally.

The Pitchow’s coat can be either short or fluffy, depending on which parent your puppy takes after. The Pitchow is best-suited to a home with plenty of space and a yard to run in. These are big dogs, weighing up to 50 pounds, and consequently, they don’t do well in small apartments.

Pitchows have a slightly shorter muzzle than that of a Pit Bull, but they don’t fall into the flat-faced breed category with its associated health problems. The Pitchow’s jaw is wide, and his tongue is often long and purple like that of a Pit Bull.

The Chow Chow tends to be cross bred with other relatively large breeds. Therefore the likelihood is that your Chow Chow mix will be a medium to large dog as an adult. You can roughly predict your puppy’s adult size because it will be somewhere between the average sizes for each parent breed.

The Chow Chow has a long history as a protective watchdog and guard dog. Although combining them with another breed that is more laid back can result in a friendly puppy, this isn’t usually the case. Most Chow Chow mixes are very loving and loyal to their families, but wary of strangers. However, early socialization and picking a puppy from parents that are relaxed around strangers will help to ensure your dog grows into a friendly adult.

When you bring home your Chow Chow mix puppy at eight weeks old, you’ll need to spend the next six or eight weeks focussing on socialization. This means taking your puppy everywhere you go and they might go as an adult dog. You’ll need to carry them until their vaccinations have been carried out.

You will also need to make sure you have plenty of guests over to the house too, meeting the puppy with affection and treats.

Training a big powerful dog should only be carried out with positive reinforcement methods. Don’t get into conflict with your large, stubborn puppy. Instead motivate them to work with you, and reward their efforts.

The best way to find a healthy Chow Chow mix is to choose a puppy where the other parent is from a healthy breed, and both parents are health tested. As a good rule of thumb, structurally dogs that look more like their wolf ancestors tend to be fitter. But look up the health issues of your cross bred puppy, as they can inherit them despite being a mixed breed.

The Chow Chow has deep-set eyes. Their skin folds can cause eye problems. When you buy a Chow Chow mix you risk taking on these problems too. Other common health issues that may affect this breed include:

The Chow Chow is a brachycephalic breed. These flat-faced dogs can suffer from compromised breathing and are prone to overheating. However, many vets class Chow Chows as mesocephalic dogs. That means their heads are medium length, rather than flat.

It’s important to bear all these potential health issues in mind when choosing a Chow Chow mix breed dog. Mixed breeds can inherit the characteristics and health problems of either or both parents. You can’t tell exactly how your puppy will turn out, so be very wary of choosing a cross between a Chow Chow and another dog breed with a flat face.

All cross-breed dogs will inherit some of the looks, personality, and health problems that affect both their parents. Chow chows are not the friendliest of dogs around small kids.

They won’t appreciate a rough and tumble game and are best in a home with no children or with older kids who understand how to treat a dog correctly.

Bear this in mind when choosing a Chow Chow mix if you have children in your household.

Is A Chow Chow Mix Right For Me?

Many Chow Chow mixes make great pets, but they can be intolerant of small children and other pets.

The size, temperament, and looks of your Chow Chow mix will depend on which of his parents he most takes after.

Before deciding to take a Chow Chow mix puppy home with you, be sure to ask to see his parents.

Also, you should ask the breeder to show you any veterinary certificates that are available for conditions such as hip and elbow dysplasia.

If either parent has a history of either of these conditions, it would be best to look elsewhere.

Do you have a Chow Chow mix?

If you do, we’d love to hear all about him! Please share your story in the comments section below.