You are here: Home / Breeds / Boston Terrier Pitbull Mix – Is This Cross Right For You? 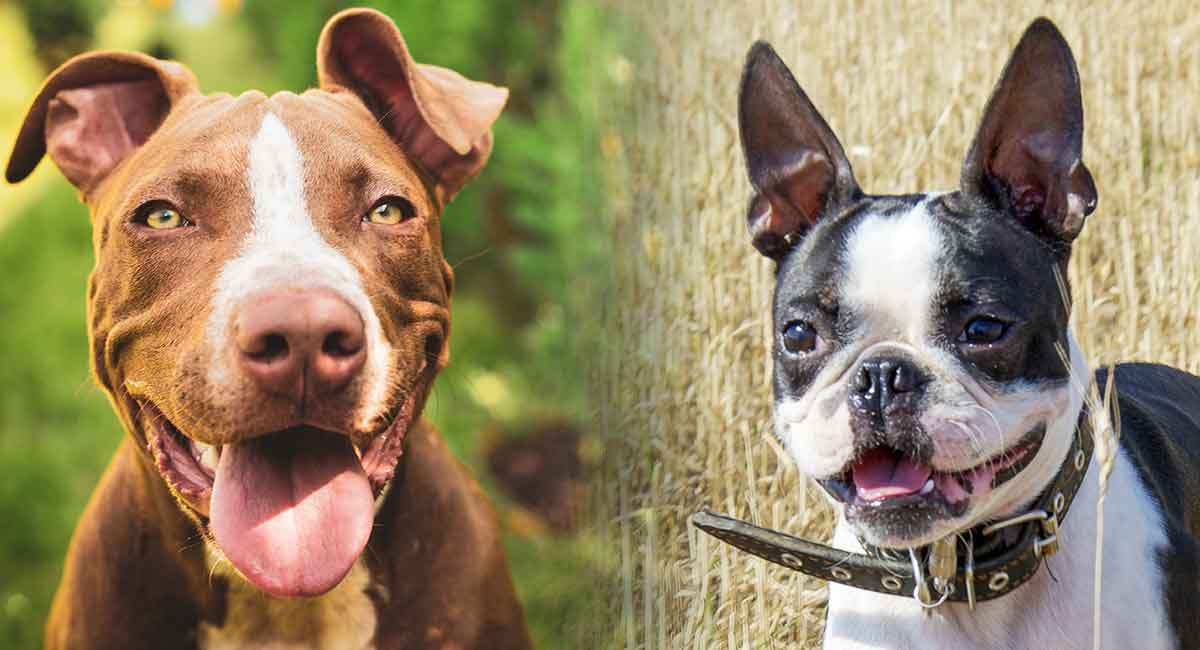 On the outside they have a lot of physical attributes in common – it’s easy to imagine how a mix of these two American stalwarts of the canine community might look.

But what about on the inside?

Is a Boston Terrrier Pitbull mix a good pet? Are they healthy or easy to train?

Let’s have a look!

Where Does the Boston Terrier Pitbull Mix Come From?

It’s Hopper’s Judge that the American Kennel Club cites as the ancestor of nearly all true modern Boston Terriers. His offspring bred with one or more French Bulldogs, laying the foundation of the Boston Terrier breed

The first Pitbulls were also created by crossing Terriers and Bulldogs, to unite agility and strength

In the United Kingdom, these dogs were used for bull-baiting and bear-baiting, until blood sports were banned in 1835

Today, Pitbulls in the US have a difficult reputation. Misuse and mistreatment of these dogs means they are closely associated with aggression and violence, which responsible owners are still trying to overcome

There is some controversy surrounding hybrid dog breeds. Mixing tow different pedigrees has unpredictable results, however, mixed breeds tend to be healthier than purebred dogs due to their more diverse gene pool.

When you look at a Boston Terrier and Pitbull, it’s no surprise to find out they’re distantly related cousins after all

Their mixed breed puppies are certain to have a short, smooth coat, and triangular ears. But what other features might they inherit?

Coat colors vary from brindle, seal, and black with white. The Boston Terrier is a small framed dog with short legs and a round head

Pitbulls are medium sized dogs that stand from eighteen to twenty-four inches tall and weighs around thirty to sixty pounds.

They have a muscular build and are powerful for their medium size. They have a large wedge-shaped head with wrinkles present on the forehead.

Boston Terrier Pitbull mix puppies could grow up to be anywhere between 25 and 60 pounds. Their shape resemble one of their parents more closely than the other, or be a perfect middle ground

The Boston Terrier temperament varies from dog to dog. Some can be rowdy, and some can be sassy, others may be more mellow and subdued, while others will do anything for fun

All Boston Terriers love people, activities, and attention. These dogs are suited perfectly to people can keep their Boston Terrier by their side for most of the day, because they love company

Many Boston Terrier owners say their dog can sense when their owner is sad, happy, lonely, or angry

Pitbulls have a fearsome reputation. Their violent history is a result of bad breeding by humans – selecting the most aggressive dogs to breed forward, and training them to react to strangers with fear and aggression.

However a well-bred and cared for Pitbull is actually very soft at heart!

Pitbulls are loyal, loving, and happy companion. They enjoy being with family and being a part of family activities, clowning about and dishing out affection

It is important to potty train every dog.

Most dogs take a little time and consistency to get them potty trained properly. When they are potty trained, you will avoid unwanted accidents in the house.

For a lot of owners, successful potty training is goes hand in hand with crate training too.

In addition, all dogs need to be socialized and exercised. For these clever dogs, that means daily opportunities to test their mental agility as well as their physical muscle. Puppy obedience classes are a great way to achieve both at once in the early day

Our training guides will help you find your feet and make a positive start on training.

They might need more if they are more Pitbull-sized than Boston Terrier-sized.

In return, this exercise will also keep them from becoming bored and chewing up things inside the house

Mixed breed dogs are vulnerable to all the same health problem which most affect their parents.

The Boston Terrier can suffer from curving of the back, called roaching. Sometime this is linked to knee problems in the back legs, which can cause the dog to lean forward

Due to the Boston Terrier having a shortened muzzle, they may have difficulty breathing and regulating their temperature

Boston Terriers tend to get corneal ulcers due to their large and prominent eyes making them vulnerable to dust, sand, debris, and sharp objects such as thorny plants.

You will need to take extra care when taking care of a dog with a shortened muzzle and prominent eyes. They will also need to be groomed and bathed regularly to maintain healthy skin and prevent fleas

Pitbull’s have some health concerns that include

Good breeders will take their breeding dogs for a full check up with a vet before they mate, and screen them for hereditary disorders which they could pass on to their puppy.

In conclusion, a Boston Terrier Pitbull can potentially suffer from some serious health issues. The most severe of these are the consequences of inheriting a Boston Terrier’s brachycephalic muzzle shape.

These problems may not affect their lifespan, but they can compromise a dog’s comfort and quality of life all the way from puppyhood to old age, and incur a lot of expensive veterinary care.

This dog has all the ingredients for a winning personality and a loving companion.

But unfortunately we cannot recommend buying one as a puppy, as they propagate the health problems of the brachycephalic Boston Terrier.

We recommend adopting an older Boston Terrier Pitbull instead.

Sadly, many Boston Terriers and their mixes end up on rescue shelters because their owners could no longer afford the vet bills that come with owning a brachycephalic dogs

Likewise, Pitbulls and their mixes fall victim to their unlucky reputation. Pitbull owners discover that they cannot rehome all of the puppies from a litter because people are worried about aggression, and eventually they abandon them at a shelter instead.

Rescuing one of these dogs or their mix from a shelter gives you the opportunity to find out what their adult health and temperament is really like.

We’ll include a list of Boston Terrier and Pitbull rescues at the end of this article – let us know if you have another to add!

The Boston Terrier Pitbull mix is prone to being energetic and playful, you will want a toy that they can play with to keep them busy

Since this mix has the potential for a smaller mouth, you may need to look into smaller chew toys.

We recommend getting your puppy a harness instead of a leash, to protect their windpipe and back.

Pros and Cons of getting A Boston Terrier Pitbull Mix

Let’s round up some of the pros and cons:

Since the Boston Terrier Pitbull mix is likely to inherit several health issues, including a short muzzle and prominent eyes, we recommend looking for healthier alternative breeds

You might also be interested in these if Pitbulls and their crosses are outlawed in your area.

Take a look at:

These rescue shelters specialize in the Boston Terrier Pitbull’s parent breeds. They might also be able to help you find a mixed breed dog

Is a Boston Terrier Pitbull Mix Right for Me?

Every dog has the potential to be a great companion, but for some mixed breeds the commitment is not a straight forward one

Due to the conformational health problems of the Boston Terrier, sadly we can’t recommend continued breeding from these little dogs.

However if you have a chance to adopt one of these mixes, armed with lots of information about their health and temperament, you might just find a wonderful friend for life.