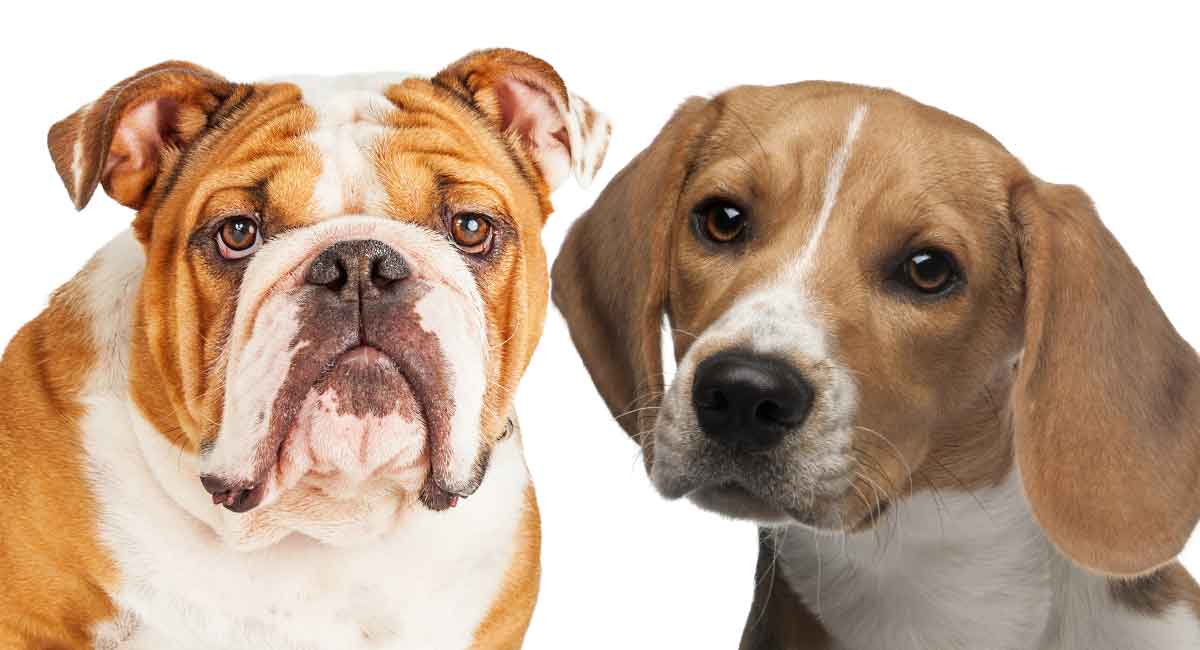 Have you heard about the Beabull – the Beagle Bulldog mix?

Whether you’ve never heard of the Beagle Bulldog mix before or are just looking for more Beabull info, you’ve come to the right place.

This is your complete guide to the Beabull – the Beagle Bulldog mix!

The Bulldog and Beagle Are Both Popular Breeds

Each of these dogs is the most popular breed in their respective group (non-working and hound).

In fact, the Bulldog is America’s fourth most popular dog breed overall, with the Beagle coming in close behind as the fifth most popular.

Because mixed breeds aren’t as well documented as pure breeds, we can’t know for sure how popular the Beagle and Bulldog mix is, sometimes it’s also called the Beagle Bull

Considering the rising popularity of mixed breeds in general, and the popularity of the two parent breeds however, it’s probably safe to say that there’s a lot of interest in Beabulls and Beabull mix puppies.

Intrigued yet? Then keep reading for more Beabull info and even some adorable Beabull pictures!

Not everyone supports the crossbreeding of dogs.

The reality could not be more different.

The strict conformity standards for most purebred dog breeds have led to inbreeding of dogs and selection for unhealthy traits.

Mixed breeds, on the other hand, inherit traits from a much larger gene pool, correcting for unhealthy traits and reducing the likelihood of inheriting a genetic health defect.

However, with there is some cost to crossbreeding as well.

That larger gene pool also means that there’s no way to predict how other inherited traits will combine in a crossbred dog.

For this reason, we’ll be giving a description of the possible traits that the Beabull – the Beagle Bulldog mix – can inherit based on the traits of the two parent breeds, since guaranteeing specific traits is impossible.

Multigenerational crosses will be more similar to one breed or the other, but there is no way to pick and choose traits from each parent breed.

To be clear, when we talk about the Beabull, we’re talking about the English Bulldog Beagle mix.

While the American Bulldog Beagle mix and Beagle cross French Bulldog are also interesting mixes, they are genetically different from the English Beabull and need to be discussed separately.

The origins of the Beabull dog breed, like most mixed breeds, isn’t clear, but we can guess that it was started in the United States some time in the last two to three decades.

We know more about the origins of the parent breeds, however.

The term “Beagle” originated in England as a catch-all term for scent hounds back in medieval times, but the modern Beagle came to be in the middle of the nineteenth century.

Numbers of small scent hounds were dwindling, but the rise of fox hunting as a trend made them more in demand.

Hunters began to cross breed their scent hounds, selecting for tracking skill and small size, eventually leading to the Beagle as we know it today.

The oldest known record of the Bulldog dates back to the sixteenth century.

This breed was bred in England for bull-baiting, and breeders selected for the large head and shoulders and for fearless and aggressive personalities.

When blood sports were banned in 1835, breeders started breeding for gentler, calmer personalities so that they could sell Bulldogs as pets.

How Big Do Beabulls Get?

Because Beagles and Bulldogs have similar heights, that aspect of Beabull size is pretty easy to estimate.

The typical Beabull full grown is between 13 and 15 inches tall, though if the Beagle parent is less than 13 inches, the Beabull puppies may also be smaller.

Weight, on the other hand, is much less predictable for a full size Beabull.

13 to 15 inch Beagles weigh between 20 and 30 pounds, while Beagles which are 13 inches and smaller will weigh less.

On the other hand, male Bulldogs weigh around 50 pounds, while females weigh about 40 pounds.

An adult Beabull can weigh anywhere in that range, but they usually fall somewhere in the middle.

So a male Beagle cross Bulldog can weigh anywhere from 20 to 50 pounds, but will most often fall into the 30 to 40 pound range.

A female can weigh anywhere from 20 to 40 pounds, but is most likely to be in the vicinity of 30 pounds.

The Bulldog and Beagle have pretty similar coats, so there’s not a lot of variation in Beabull coats.

The Beabull will have a smooth, hard coat that lays close to the body.

It can have a short or medium length, and the Beabull may inherit the Beagle’s dense double coat.

The Beabull may be a light or moderate shedder and will need brushing two or three times a week.

If the Beabull does have a double coat, daily brushing will likely be necessary during shedding season in the spring.

Most Beagle Bulldog puppies inherit the Bulldog’s short tail, short and wrinkly face, and stout legs, but they usually don’t have these traits to the same extreme as purebred Bulldog puppies.

They also may not have any of these traits at all.

General Care of the Beabull

The breed’s folded ears can trap moisture, so they should be checked weekly to prevent infection.

Similarly, any folds or wrinkles on the face also need to be checked to make sure that food, moisture, and dirt has not been trapped, which can cause infection and skin fold dermatitis.

Any buildup can be removed with a peroxide dipped cotton ball and cornstarch can be used to aid drying, but neither should be used around the eyes.

Bulldog puppies that are overfed, causing them to grow too quickly, may experience osteochondritis dissecans, a disorder in which joint cartilage does not adequately attach to the bone.

This may also occur with Beagle Bull puppies, so owners and breeders of Bulldog Beagle mix puppies should work with their vet to determine the healthiest diet for their pups.

Both the Beagle and the Bulldog tend to be patient, sweet, and friendly, but with a stubborn streak, so the Beabull can also be expected to have these traits.

Beabulls love their families, especially children, and are happiest when they are spending time with them.

They get along with other dogs well and may actually prefer a household with multiple dogs.

The rest of a Beabull’s personality may resemble that of the Bulldog, the Beagle, or a mix of both.

Like Bulldogs, Beabulls can be devoted, mellow, and relaxed, with a love of chewing and playing tug-of-war.

Like Beagles, Beabulls can be playful, curious, and energetic.

They may be very scent driven, enjoy digging, and be destructive when bored, traits that can get them in trouble without proper training, exercise, and mental stimulation.

Both the Beagle and the Bulldog are prone to obesity, so regular exercise is essential for your Beabull.

However, the Beabull, like the Bulldog, suffers from Brachycephaly, meaning that it has a shortened facial structure which leads to breathing issues and other health problems.

It’s therefore essential that the Beabull is supervised during exercise, isn’t allowed to get overexcited, and doesn’t stay outside during very warm weather.

Stairs and swimming can also be difficult for Beabulls with short legs, so they shouldn’t be left unsupervised around stairs or even shallow pools of water.

Bulldogs are generally not the best listeners, but Beagles are people pleasers, so ease of training isn’t easy to predict.

Both breeds are very food motivated, so treats are great motivators for Beabulls during training.

However, Bulldogs can be territorial over their food, so owners should take food from their Beabull puppy (before giving it back, of course), including directly from the dog’s mouth, to prevent food aggression.

Bulldogs can also be mouthy, enjoying chewing and tug-of-war.

The Beabull should also never be permitted to put any part of a human or other animal in their mouth, even gently.

The breed’s strong jaws make it easy for accidental injury to occur.

Socialization and training classes are a must for Beabull puppies.

Health Problems of the Beabull

As you might have guessed from references to health problems that have already been made, the Bulldog is not a healthy breed with a lifespan of just 8 to 10 years.

Many of the breed’s problems result from Brachycephaly, including sleep disorders, an increased risk of choking and gagging, snoring, and various respiratory problems.

Because of their large hips and narrow heads, Bulldogs also suffer many problems related to reproduction and birth.

Bulldogs often have difficulty with the act of breeding and female Bulldogs have to give birth through cesarean section most of the time.

Seventy five percent of breeding female bulldogs have to be artificially inseminated according to a 2013 study.

The Beagle, on the other hand, is a relatively healthy breed and has an average lifespan of 10 to 15 years.

The most common problems for Beagles are obesity and hip dysplasia.

Hip dysplasia affects almost a fifth of Beagles, according to the Orthopedic Foundation for Animals (OFA) and occurs when the hip joint doesn’t correctly form, causing pain and possible mobility problems.

Hypothyroidism, epilepsy, and vision problems like glaucoma are also common in Beagles.

Even with the relative health of Beagles, Beabulls are still at risk for serious health problems, especially obesity, joint dysplasia, and vision problems since these are common among both breeds.

How to Choose a Beabull

A breeder should be able to prove that his or her dogs are healthy by registering them with a health database like the Canine Health Information Center (CHIC).

CHIC requires that Beagles be tested for hip dysplasia, vision problems, MLS, and either cardiac issues or thyroid issues.

CHIC requires that Bulldogs be tested for:

are also recommended, but not required.

Of course, more tests means greater assurance about the health of the dog’s offspring.

Before choosing a Beabull, you must be prepared for the health problems that the dog is likely to experience.

You also need to be prepared for temperament and trainability from either breed.

While you will almost certainly get a sweet companion, you should be prepared for a dog also that’s stubborn, difficult to train, very active and excitable despite health problems that make too much activity and excitement dangerous.

Now that you know some Beabull facts, how do you feel about the Beabull – the Beagle Bulldog mix? Let us know in the comments below!